Share All sharing options for: Certainly Puts CheesesteakGate In Perspective...

Over the weekend, the other shoe dropped. Thankfully (we hope), someone caught it just in time. 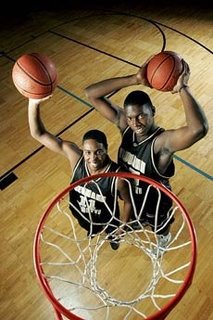 You may remember a few months back I mentioned a nasty rumor circulating about basketball team and a sexual assault claim. You may have even read about it on the message boards where it spread like a nasty virus. The silence from SU and the police was deafening, to the point that we had to assume nothing would ever come of it, for better or worse. Just as quietly as the issue seemed to fade away, it reappeared Saturday like a punch in the face of every Syracuse fan with a hope that, no matter what was ahead for football, we at least have SU basketball to look forward to. And then three members of the SU basketball team were officially accused of sexual assault:

We had some fun around these parts about Scoop Jardine and CheesesteakGate last season, but stealing a couple bucks to buy some hot wings and sandwiches is one thing...sexual assault is in a whole 'nother zip code.

And Jonny Flynn? JONNY FLYNN? ARE YOU KIDDING ME? Scoop and Rick Jackson...let's face it, if they were booted from the university it would be a shame, but if Jonny were guilty of these allegations and kicked off the team...let's just say that although basketball concerns are not the top priority here, we'd probably be begging for an NIT berth this season without him...

So what the heck happened? At least, allegedly?

The allegations were related to two events involving the woman and the players in September and October. A proposed agreement between the university, the players and the woman fell apart in January, setting the stage for this week's grand jury investigation.

The woman, an SU freshman last year, withdrew from school for the spring semester.

Ugh, ugh, ugh. I read the words "a proposed agreement between the university..." and immediately I'm having University of Iowa-sized heart palpatations. My worst fears were possibly about to be realized, that Syracuse University might have purposefully tried to smother sexual assault allegations for the betterment of a privileged few because they're on the basketball team. Let's dig in and find out...

The incident was reported to SU's Department of Public Safety in November, according to a timeline compiled from information obtained from the university. (The university rejected a Freedom of Information Law request from The Post-Standard in January for public safety reports on the incident.)

After the woman made the report, staff from the university's judicial affairs office met with her to see if she wanted to pursue an informal resolution or go forward with the formal hearing process, according to the timeline. Most of SU's judicial affairs cases are resolved informally, SU said.

In situations like this, I wish we could propose a common sense rule...if a student does something like cheat on an exam or steal a food card...then sure, the university has the right to take action. If a student claims a felony like sexual assault, the University should immediately get the fuck out of the way and hand-deliver the students, the claim and any evidence to the police and then sit back and wait to be told what to do. Anything else, and well, something like U of Iowa is a distinct possibility.

The alleged victim's mother contacted SU Chancellor Nancy Cantor in November, and the two met, according to the timeline. The university's executive committee of the board of trustees was briefed on the situation in December, the newspaper learned.

The woman was not seeking criminal prosecution and thought justice would be served by going through the formal university judicial system, according to her mother's January letter to Trunfio.

Hate to play Devil's Advocate here but I have to wonder if that was what she really wanted or what the University wanted. If I'm a parent (and I am not), and someone allegedly sexually assaults my daughter, I go straight to the cops and don't waste a second worrying about University policy. Again, it might all be legit but...just saying...

According to the timeline, the university put that hearing process on hold in the fall when the District Attorney's Office notified SU it would move forward with grand jury proceedings.

But no grand jury heard the allegations last fall, Fitzpatrick said Friday, because his office was told soon afterward that a resolution had been reached by the parties.

He said he initially threatened a grand jury review because he learned the university left it up to the woman to choose whether her allegation would be handled as criminal prosecution or a campus disciplinary matter. That's an unfair burden to place on a possible victim, he said.

Am I crazy or should the Syracuse District Attorney not wait around to see what the University will do when a sexual assault is alleged?

A university spokesman, Kevin Morrow, said that, in general, when a felony involving a student is alleged, SU defers to Syracuse police and the DA's office. "The university takes this responsibility seriously and would never consider making an exception to this policy," he said.

Before the end of the year, however, Fitzpatrick said, he met with lawyers for the university, the woman and the players. He was told a resolution had been reached that included some punishment of the players and precluded the need for any criminal investigation, the DA said. Fitzpatrick said he signed off because he was told the woman was no longer claiming to be the victim of a forcible sexual assault.

Britt said his client maintains that she was the victim of a forcible sexual assault and said that she has not recanted her allegations.

On Jan. 14, in a letter obtained by The Post-Standard, the woman's mother told SU Senior Vice President and General Counsel Thomas S. Evans that her daughter had not agreed to any resolution.

And there it gets really weird. And of course, now those Duke rape case doubts creep in. To be fair at this point, it's only right to mention that all three players are on record for not having done whatever it is they were accused of. And in the post-Duke rape case world, it's hard to say who to believe and what to think about all of this.

Well it all went to a grand jury on Saturday and they must have not liked what they had to hear because they threw the case out. Crisis averted. Justice done...we can only hope.

"At the end of the day for the grand jury, what may be looked at as something that they were not comfortable with, something they would not want their children to be doing, they were not there to be the University morality police or the parents of these children," Fitzpatrick said. "They were asked if there was a reasonable belief that a crime had occurred and they answered that question with a resounding, 'No.'"

From my understanding, it takes a lot for a grand jury to say no to a case, so it sounds as though either this event really didn't happen "that way" or there was enough doubt for this issue to be put to bed. Either way, I'm more than happy to oblige.

Of course, this still leaves the door open for the University to do their own due diligence and discipline the players, which they plan to do:

On Saturday, a spokesman for Syracuse University said the college plans to go ahead this month with its disciplinary proceedings. The woman's mother said her daughter plans to participate in that process.

Much more to discuss on this and I'm sure we will tomorrow. Couple questions to mull over in the meantime...what will the punishment (if any), eventually be? Why did this story seem to only exist in Central New York and went unnoticed by the national media (as far as I can tell)? What really did happen (of course we'll never know...but still)? Between this and the Iowa case, will Universities finally learn than anytime they try to suppress or keep quiet sexual assault allegations, they're only making things worse?