Share All sharing options for: As The First-Strings Turn 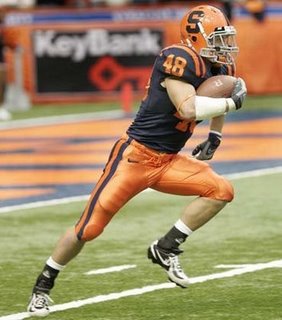 With Bruce Williams back over at wide receiver, the free safety position suddenly feels like a free-for-all. But if SU special teams guru Max Suter has anything to do with it, the speculation over who will start will be short-lived. Then again, Paul Chiara is probably thinking the same thing:

Suter said after yesterday morning's practice that while he's getting work with the first-team defense, so is senior Paul Chiara, a former tailback moved to defense in the spring. Suter said the position is "pretty much up in the air."

That may be true. And it's a credit to Chiara that he has persevered and overcome his own disappointments (being bypassed at tailback) and setbacks (his equipment room misdeed) to be in this position. At the same time, Suter is a Greg Robinson recruit who was good enough to play some safety as a true freshman. Unless Robinson decides to slide senior A.J. Brown over from strong safety, Suter has to be the front-runner to take over for Williams.

It seems like a friendly rivalry from what Max has to say, but not one where each competitor is going to soften up. Oh, and don't count A.J. Brown out of the mix for free safety as well, especially if he gets pushed out of the strong safety spot by Randy McKinnon or Kevyn Scott.

Over on the other side of the ball, while we suddenly have a lot of bodies at wide receiver, we certainly don't have much experience. Beyond Lavar Lobdell, Bruce Williams and Donte Davis, you're looking at a class of untested first-year players. Donnie Webb breaks them down based on camp so far:

"I think we'll be a very solid, wide receiver group. When? I don't know," White said. "Is there a Mike Williams in there? Mike is Mike. There (are) guys there that have gifts. They just got to be pressed ... and pressed hard."

The unit most affected by injuries so far this Fall? Linebackers. And it's throwing the whole unit into a bit of chaos.

Two potential starting linebackers for the Syracuse University football team are sidelined with injuries, leaving one of the team's suspect units thinner and anxious.

Redshirt freshman Chad Battles is the latest linebacker to go down in preseason camp. Battles missed both of Monday's practices because of muscle spasms in his glutes, said head coach Greg Robinson.

Battles has been working with the first-team defense all preseason camp because of an injury to sophomore Mike Mele, who has yet to practice - or even to be seen running - because of a turf toe.

For those players on the field, senior middle linebacker Jake Flaherty has been all over the field playing each spot. Junior Mike Stenclik has looked so good that the coaches are considering moving Flaherty over, at least to start the season, in order to get Stenclik some reps. It looks like sophomore Derrell Smith is going to beat out Parker Canty for one of the outside linebacker spots.