Anything Else We Can Get You, Notre Dame? A Cold Beverage, Perhaps?

Share All sharing options for: Anything Else We Can Get You, Notre Dame? A Cold Beverage, Perhaps? 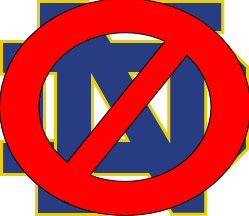 Probably not the best article to write as I'm about to step into a chat with some Notre Dame fans, but Tim Stephens over at the Orlando Sentinel was wondering just exactly what Syracuse is thinking by wanting to play Notre Dame under the proposed conditions:

If you wonder if the Big East is ever going evolve into a league capable of truly challenging the real big boys of college football consistently, I offer yet another example of its bush-league mentality.

After Rutgers decided to act like a real program and told Notre Dame where to stick it, Syracuse apparently will undercut the Scarlet Knights and be the Irish's concubine -- IN RUTGERS' BACK YARD!!!

Yesterday, Donnie Webb make some salient and legitamite points as to why we should do this deal and from the inside looking out, it does make somewhat sense (although I still believe at lease one of those games should be played in the Carrier Dome).

But the reality is that for those on the outside looking in, this is what the deal looks like. It looks like we're openly declaring war on Rutgers. And we're doing it while turning ourselves into Notre Dame's lapdog:

And that's the rub ... Notre Dame first approached Rutgers with this deal, and the Scarlet Knights rightfully turned it down. Why should Big East teams kowtow to Notre Dame while the Irish enjoy all then benefits of psuedo-Big East membership without having to actually commit to it? Now a Big East mate stabs them by taking the deal and playing it in Rutgers' home state ...

As if Rutgers didn't already have enough reasons to want to beat our asses, this one is certainly moving to the top of the heap if it gets approved. Although if you believe this New York Times article, at least you can count on Greg Schiano not being there much longer to be the one to do it. 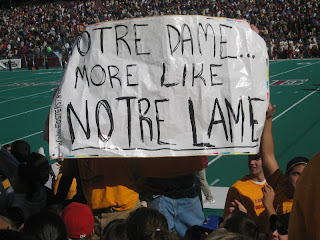 As for Notre Dame, with them on our schedule now and possibly for the next century, it's always good to brush up on your reasons to hate them. And with that, I direct you to The Top Ten Reasons We All Hate Notre Dame (HT: Mirtch). One reason in particular though, should get Syracuse fans in the proper state of mind:

Notre Dame boasts about having the most Heisman Winners in its history with 7 ( Tied with USC and Ohio State who actually has 6 winners and 7 trophies). I have a problem with 2 of their last 3 winners. Lets Start with Paul Hornung who took the Bronze Stiff Arm in 56’. Hornung was the running back for a Notre Dame team that finished 2-8 when he took home the prestigious honor. Who Should Have won? How about Jim Brown? His Syracuse Orangmen went 7-2 that season and were ranked 8th in the country or Johnny Majors from 10-1 1st ranked Tennessee?

See you in East Rutherford, you bastards.