Wesley, Welcome, Help Yourself To The #5 Jersey If You Like 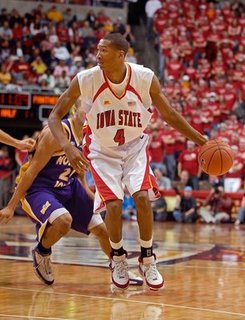 Well how 'bout that. It was a little less than a month ago that Wesley Johnson announced his intention to transfer from Iowa State and that Syracuse was on his short list. We wondered out loud if this guy was worth the effort and the purveyor of Clone Chronicles was kind enough to offer his thoughts. After that, his list of schools grew, shrank and changed but Syracuse remained on it throughout. With good reason it seems, as Wesley has officially decided to come play for us, according to Mike Waters.

Wesley Johnson, a 6-foot-7 forward who spent the last two years at Iowa State, said in a telephone interview Tuesday night that he intended to transfer to Syracuse.

Johnson visited the Syracuse University campus this past weekend. Johnson picked the Orange over Ohio State, Pittsburgh and West Virginia.

"I liked what they had to offer enough to end the recruiting,'' Johnson said Tuesday night from his family's home in Corsicana, Texas. "I really liked the school a lot. I got to meet the coaches and see the campus and the Carrier Dome. I felt good about it.''

As you know, Wesley's services will be unavailable as he sits out the season (despite the fact that if his coach wanted to change schools, he could do that immediately. Which makes sense). The good news is that he's still got two years of eligibility after that.

As a freshman, Johnson averaged 12.3 points and 7.9 rebounds per game. His numbers remained static this past season, one in which he played on a fractured foot. But put your injury fears aside for a moment as Alex from Clone Chronicles explains what the big deal is with this guy:

As a freshman, he would have been the Big 12 freshman of the year if it wasn't for that Durant guy. As a 6-6 guy playing the 4, he was a pretty good bet for a double-double in nearly every game. He's got sick athleticism and can play from the 2 to the 4. Has an incredibly sweet midrange jumper, and can knock down the three, even if he shoots it too much. Overcomes his lack of bulk by having a knack of getting to the rebound.

Johnson wore #4 at ISU, which is also available here. But just so he knows, the #5 is now available too, if he were so inclined...