Share All sharing options for: Wait A Minute...Where The F Is Mini-Kiss???

Along with the announcement that individual tickets for Syracuse home football games are on sale today, is some news regarding the festivities that will take place before and during said games. Can SU possibly top last year's pièce de résistance that was Diver Down/Mini-Kiss?

During the home-opener against Akron (Sept. 6), the University will celebrate Patriotic Day, featuring a special ticket price ($22 for adults/$13 for youth) for military and emergency service workers. Prior to the game Stroke will perform a concert on the Quad and the 2008 Orange National Championship lacrosse squad will be recognized at halftime.

The Strokes? That's amazing. Well done, SU! Finally, some talented, RELEVANT musicians on the campus to...(producer whispers in ear)...wait..singular? As in Stroke? Who the hell is Stroke?

Would it excite you if the first place I found the band was on this Syracuse Wedding Band Directory? Actually here's the band's website, where I learned that they are actually the "Cable Ace Award Nominated" Stroke...which changes things.

The Orange will play Penn State, the most familiar opponent in school history, on September 13.

That finally explains the tagline for this match-up: "Syracuse vs. Penn State: We're very familiar with each other."

The University will host Homecoming Weekend on September 20 when the Orange hosts Northeastern (Sept. 20). It will also be Youth and Senior Citizen Day, featuring $13 tickets for youth 12 and younger and seniors 60 and older.

Savvy move, SU. Keep piling on incentives until every single possible attendee feels special for showing up for this match-up with a 1-AA titan. Might I also recommend celebrating Reptilian Brain Owners Day, in which "anyone who houses a reptilian cortex at the base of their craniual structure is entitled to 30% off ticket prices." Plus this way, even Jub Jub can enjoy the game.

Syracuse’s BIG EAST conference opener against Pittsburgh (Sept. 27) will feature the return of 2008 Professional Football Hall of Fame inductee Art Monk, who will be honored during Courage Day. Prior to the game TK99 will host Almostfest in the Quad.

How do all of these home football games happen to fall on holidays that celebrate arbitrarily-decided attributes? Patriotic Day? Courage Day? Let's hope for Marvin Harrison's sake that we never end up scheduling a game on Dubious Day.

Almostfest? Jesus, I feel a headache coming on. What's this now? 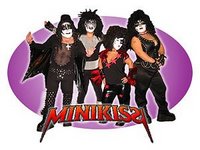 The daylong show starts at noon June 17 at the state fair's Chevrolet Court. It features a half-dozen tribute bands that pride themselves in making fans' of the original bands happy.

The good news? Mini-Kiss HAS to be involved in this, right? Otherwise, what's the point?

Former Orange All-American quarterback Don McPherson will highlight the Legends Day festivities celebrating his 2008 induction into the College Football Hall of Fame when Louisville visits the Dome (Nov. 1). In addition, a special tribute will be held for Celebrate New York Day during the University’s Family Weekend. During the game, TK99 will host its $99,000 Field Goal Challenge.

So we're celebrating Legends Day while also celebrating Celebrate New York Day in the middle of Family Weekend? Can't we move one of those to a Tuesday or something? Or is that already Chivalrous Day?

The home finale against Connecticut (Nov. 15) will recognize those who support the Orange during Fan Appreciation Day.

Festivities will include the castration of "those who do not support the Orange" at halftime. You're either with us or you're against us.