This Hopkins Guy Is Alright

Share All sharing options for: This Hopkins Guy Is Alright 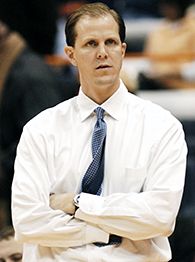 While I'm in absolutely no rush for The Jim Boeheim Era to end, I'm feeling good about the impending Mike Hopkins Era, especially after his interview with Kevin Stevens of the Press& Sun Bulletin yesterday.

He's the anti-Greg Robinson. Not only does he answer questions in a real-world-non-hyperbole way, but even when he's blowing smoke up my ass he's doing in a way that tickles me just right so I don't mind.

On what lies ahead for the Orange:

"I'm gonna tell you what: We have answers...They press? We have a ball-handling team. We're getting out-rebounded? We have a rebounding team. They're zoning? We have a shooting team."

Well shit, Mike, when you put it like that...

"You have a group of guys that played a whole year with us, a bunch of guys who played a lot of minutes...So we've got a lot of experience. I think Jonny Flynn learned a lot. And if you look at our recruiting class coming in, we've got Mookie Jones, Kris Joseph, and you look at Andy and Eric as being incoming freshmen-- one was averaging 17 a game and the other was a starter half the season the year before.

"So, you have two of the best shooters in the league and you have the best point guard (Flynn), I think, could be in the country. Arinze (Onuaku) is a guy who has been getting better every year. Last year, Arinze had a good year, Paul Harris had a good year, and we played without shooters. So now you bring in two guys, you get them open, it's money."

YES! SIGN ME UP! CAN WE JUST SKIP AHEAD TO BASKETBALL SEASON? WE'RE WINNING THE NATIONAL TITLE! NO DOUBT IN MY MIND! YES! YES! YES!