Share All sharing options for: Orange::44 Is An Absolute Magician 13.0 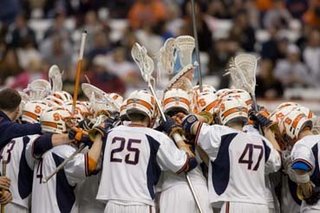 This week, I asked Brian of Orange44 about his disdain for all things Big East lacrosse, closing thoughts on Mike Williams and some early discussion on the football season, for better or worse...

TNIAAM: Alright Mr. I Hate Everything Especially Kittens And Change, I see you don't like the idea of a Big East lacrosse conference. What about thinking long term? Can't we assume that the growth of those weak programs will be accelerated just by the existence of the conference?

BRIAN: It is not that I don't like the idea of a Big East lacrosse conference, because in theory I do. I just do not like Syracuse's participation in it. That is because Syracuse really is not getting any benefit when they will most likely always get an at large bid anyway.

I think the league will be better overall for the sport however. Clearly the Big East will not half ass their participation in the sport and surely will market it and give it proper deference, especially when it is the #3 money making sport for the NCAA. Will it accelerate the growth of the weaker programs? They will only in the sense that they will be all fully funded. Rutgers, Notre Dame, and Georgetown are clearly the best teams in the conference, other than Syracuse of course. They might get marginally better because they are teams that range from great to pretty good. As for Providence, Villanova, and St. John's, I just do not see these people even close to making the tournament for at least years to come. The only way they could make the tournament would be to miraculously win the automatic bid, but that seems pretty far fetched.

This would be similar to the fact that everyone in the beginning of the year kept talking about parity when it ended up being Duke, Virginia, Johns Hopkins, and Syracuse in the Final Four.

Winning the National Championship in lacrosse and not being one of those four teams is harder than finding the loot, the warrant, and the crook in a game of Carmen Sandiego (You're getting too close, shamus -ed.). Moral of the story, it might promote the sport, but I just don't see it having a huge impact in making these teams better or giving them more of a chance to enter the postseason.

Also, I'm allergic to cats, so I guess I at least have a reason to hate them.

TNIAAM: Word on the street is that incoming SU recruit Cody Jamieson is the next coming. Will he live up to the hype next season?

BRIAN: From the hype he is getting I would assume that he will at least do something good on the squad. I highly doubt he will be the game changer they make this kid out to be. You have to remember that Dan Hardy was just as heralded when he came into Syracuse, especially wearing the #22, but he really did not have a stellar first year. Granted Jamieson is a transfer so he probably will not have as many growing pains, but I am always skeptical of anyone, no matter how hyped, unless their last name is Powell. But the kid has solid numbers and seems to be getting a lot of attention, so he should be an excellent addition to the team.

TNIAAM: It's a week later and Syracuse University has basically allowed public opinion on the Mike Williams situation dictate the story. They are sticking to their privacy policy guns. Ultimately, is this kind of policy serving Mike Williams by protecting him from dealing with his ordeal in the public or hurting him for allowing rumor mongering? Do the fans who are asked to pledge their ongoing financial support have a right to know?

BRIAN: The law is clear that the university really cannot divulge anything about his personal education situation. That is all well and good. Does it suck? Sure does. It certainly does not help Williams at all, but the university is doing what they are supposed to do. The real remedy, and the only plausible one, is the scenario in which Williams himself calls a press conference or releases a statement to either explain himself, or say what exactly is going on. Clearly the best way to tackle a situation, especially one that is potentially embarrassing, would be to just confront it head on. That would at least stop the speculation and rumors.

Do the fans have a right to no? Probably not. However, they certainly have a compelling interest in knowing, especially if they are shelling out dollar bills to support their Athletic Department. I want to know and I haven't paid dollar one to the department except in tickets (on principle I refuse to donate to the university as long as Nancy Cantor is Chancellor). Especially when football makes the world go round for athletic departments, and this player is arguably the best player on that team, I would say that everyone should be highly interested.

TNIAAM: Any plans to attend away football games this year? If you could pick your top three destinations to attend an away SU game, what would they be?

BRIAN: Sadly, I will not be attending any away games this season. I have attended away games in the past including Pittsburgh twice, Connecticut twice, Virginia Tech, and Buffalo.

On principle I think I would want to see a game at USF. This is simply because it is in Florida, there is a lot of stuff to do, and the road trip factor is high. Your own "Team Awesome Car" surely would have a blast driving down, seeing the sights in Florida, and then heading back. Minus the gas prices of course. Next, I would have to say a game at Penn State would be great. This will be possible next season and I am strongly considering

heading there. With a capacity of over 100,000 people, especially if they are all wearing white, it is a pretty intense stadium to see in person. Plus, with the big time atmosphere of college football, it is something any Syracuse fan should see. Especially because we don't see it that often these days. Last, I would say Pittsburgh. The team plays at Hines Field, a professional stadium, which is an excellent facility. Pittsburgh has a lot of fun things to do, especially Kennywood and the Strip District. You can easily walk to the stadium from one of the nearby downtown hotels, and there is plenty of tailgate space. Also, it is enjoyable to see the big ketchup bottles pour on the scoreboard.

However, I will say that Rentschler Field for UConn is only about 30 minutes from my apartment in Springfield, Massachusetts, and is a nice venue to see a game in. Plus you tailgate on an old tarmac. Plus it is a "rivalry game" these days, so you usually catch a lot of shit on the way in. If we ever manage to win there, sweet sweet vindication will be yours on the way out someday. Also just missing the list would be traveling to Notre Dame,

because seeing Touchdown Jesus, the band playing the "Notre Dame Victory March", and remembering scenes from the Movie Rudy would clearly be awesome. 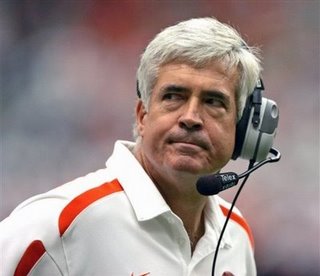 TNIAAM: Is there a possibility that Greg Robinson would be fired mid-season? For example, the Orange are winless going into the Northeastern game and somehow lost that game, could you see the outcry being too strong for Gross and Cantor to ignore? (Not that I'm hoping this is what happens...)

BRIAN: I think that if Syracuse loses to Northeastern on Homecoming Weekend he will be fired the following Monday. Losing to a Division 1-AA team has to be the final nail in his coffin, even if it is mid-season. Every Syracuse fan pretty much thought that this guy should not be the coach, so support for the team will trail off even more sharply than it did last year if this team is not keeping games close. Gross will have no choice but to fire this guy. At least, that is what the public will see. He probably will not fire him in the middle of the year, because than that makes the DOCTOR look like he was wrong in keeping him. We all know the DOCTOR can never appear wrong in public. It would be like Marty McFly seeing himself in 1955. The world would collapse in on itself. But clearly, to save any sort of financial fiasco, firing him after that would be a must.

TNIAAM: Will Leitch is leaving Deadspin as editor. Did you guys start Orange44 before or after Deadspin's existence? And if before, what kind of impact do you think the site has had under Leitch's guidance in the sports blog world?

BRIAN: Orange::44 actually started in March of 2005 by Matt Glaude, now of Hoya Suxa. He created this blog with the simple purpose of chronicling the daily disaster that is Syracuse Athletics. Deadspin started in September of that year. I personally started contributing to Orange::44 in April of 2006 as a writer. I can honestly say that I initially did not receive that much inspiration from Deadspin. When I first signed on, I felt that my role was more of the serious writer, editorializing and writing post game reports, rather than trying to be humorous. That role was filled nicely by the other contributors and Matt especially. The more I got into the whole blog thing the more I appreciated what Deadspin was doing. They were presenting the sports news in a highly accessible, humorous, and entertaining way. Clearly they have become the model for success in sports blogging and it is undeniable, at least from the last year, that any blog that has started in recent history has gotten some inspiration from Deadspin and Will Leitch.

Today, now that I am currently the only contributor to Orange::44 I find I do try to mix our standard postgame coverage and editorials with humor, more pop culture references, and generally being more inflammatory to rival schools. If anything, Deadspin taught me to have more fun at the entire blogging thing. I know I just gave the main stream media a talking point to bash blogs on, but that doesn't mean the coverage or quality needs to diminish. On the contrary, Deadspin is the best illustration that you can still be informative and complete in your coverage, all while being absolutely hilarious. I may have learned how to do this blog thing from Matt Glaude, but I certainly became a lot more well rounded because of Deadspin. Will Leitch certainly will be missed and I wish him the best of luck.