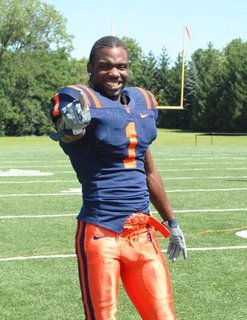 Well, look at it this way. Now instead of filling yourself with false hope for the next four months, you can just begin being disappointed now and by the time the football season gets here you'll be over it already. I'll let the Post-Standard's Mike Waters explain:

Syracuse University junior wide receiver Mike Williams of Buffalo has been suspended by the school over an academic issue. His future with the team appears in doubt.

Head coach Greg Robinson declined to offer details Monday night. He would only say that Williams "is not enrolled at the university due to an academic issue." He added privacy laws prevented him from discussing the situation.

Asked if the academic issue will force Williams to miss the 2008 season, Robinson repeated that he could not comment because of "privacy laws. I can't go further other than to say he's not enrolled at the university."

The Daily Orange backs up the story as well. Just in case you need a little perspective, here's what Syracuse will be missing if Mike Williams does not return to the team this season:
Everyone at the school is playing the privacy rule card and staying mum. Probably for the best. So help me God if tonight or tomorrow Greg Robinson starts doing the "we're just gonna keep fightin' the fight" dance and tells us how much Lavar Lobdell has "flashed" for him this spring, I might explode.

Remember when Taj Smith announced he was going pro and Cuse Nation collective sighed "Whatever, we got Williams" and wished him well? Well all of a sudden Taj Smith looks like Art Monk. With both options off the table, our starting receiving core is now junior Lavar Lobdell who has never caught more than three passes in a game, junior Donte Davis who is coming off a hand injury and untested freshman such as Marcus Sales and Van Chew. One of the few areas on the team we didn't need to worry too much about this year has suddenly become a huge problem area.

So many people to tangently blame. Taj Smith for leaving us without a good 2nd option. Williams' teachers for not faking his grades or looking the other way while people take his tests for him. Greg Robinson and his coaching staff for allowing their star player to get kicked out for academic reasons. If Williams assaulted someone or cheated on a test, that's one thing. But if he's out of here simply for bad grades, that's inexcusable on so many levels.

In all seriousness, Andrew Robinson and Mike Williams were poised to be the greatest QB/WR combo in the history of Syracuse football. And that's not hyperbole. That's fact. And now...I know we're only hours into this...but if it's as bad as I think it might be...what a waste. It's a God damn waste.

A couple weeks ago, SUAthletics posted a puff piece on Williams and his eagerness to be a leader. Williams was adamant about his desire to lead by example:

"I just want to lead by example and show everybody the right way – catch the ball, block, do everything that Coach says," Williams said. "If people see that I’m doing it, I hope that they will do it too."

Unfortunately, those words may end up haunting Williams, and SU football, for a very long time. Surely, there's more to come on this. Stay tuned...