If Pitt Is Penn State's Jilted Lover, Syracuse Must Be It's Mistress

Share All sharing options for: If Pitt Is Penn State's Jilted Lover, Syracuse Must Be It's Mistress 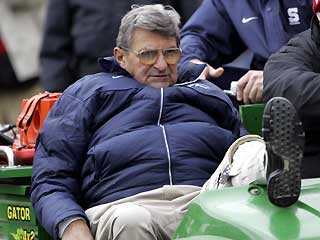 Until they schedule Pitt, Penn State has no business scheduling Syracuse.

Such is the opinion of The Sporting New's Matt Hayes. It's no secret that Penn State doesn't want to give Pitt a fair shake and would only play the Panthers if they could get more home games than road games, something Pitt is unwilling to agree to and rightfully so. Certainly, the two teams are a natural fit to play each other every year instead of some of the Lions' opponents...but why do we get singled out?

Penn State leads the series, 50-42-2, and nearly everyone who has ever played in this once storied rivalry wants it to happen again. Instead, we get this from the Penn State non-conference schedule: Coastal Carolina (that's not a misprint), Temple (nor is that), at Syracuse and Oregon State.

That Syracuse game, everyone, should be Pitt.

Hold on, what did we do wrong? First, Penn State should kick us off the schedule before they kick off Coastal Carolina or Temple??? I know we suck but c'mon now...

Second, I defer to Russionator over at Three Idiots who points out the most glaring omission...Syracuse is as much a rival to Penn State as Pitt ever way.

Look, Syracuse football sucks right now, there's no arguing that. You know what else there's no arguing? That Penn State and Syracuse are traditional rivals that have played 68 times! Syracuse got screwed by Penn State and their demands a decade before Pitt, but 68 times is tradition. Don't fault Syracuse because the athletic department got it right and got Penn State back on the schedule - point the finger where it belongs, at Joe Paterno and Penn State - because when you argue that it's "bogus" that Syracuse is playing a rival - well there's a lot that's bogus about that.

The last thing Pitt and Syracuse need to be doing is bickering like two women on The Jerry Springer Show fighting over the redneck slimeball two-timing both of them. If Pitt ever decides to do business with the Nittany, great. But it's not our fault if Penn State is being a dick about it.

(Courtesy of Three Idiots on Sports)