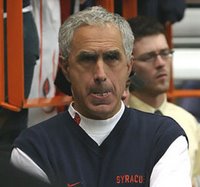 When you see that in your inbox, you can't help but feel bothered. Hell, I'm the guy who just said SU will probably only win two games this year but it's something different to hear someone else say it. I know that deep down I still have hope despite my "expert opinion." I'm openly rooting for the Orange to win every game even if my common sense tells me otherwise. But when a person "unaffiliated" says it, it's kinda like when someone makes fun of your crazy Uncle.

Everyone's got a crazy Uncle. And when your family gets together, inevitably the conversation finds it way to your crazy Uncle and the strange reason he didn't make it to Thanksgiving/Easter/Purim dinner and then the floodgates open and everyone has a good laugh at his expense. But if you were walking down the street and someone said your crazy Uncle was...well...crazy, you'd defend him to the death. It doesn't make it any less true. I suppose it's just because you can vouch for yourself, that you know if push came to shove you know your crazy Uncle is a good guy, he's just "in a down cycle." But you can't vouch for that other person. You don't know if they think like you do or if they really do think your crazy Uncle is crazy.

Anyway, so I settled in and read the article about the demise of Syracuse football. Giddy up.

...The Syracuse football program...is a demoralized shell of its former self. Mismanaged by a pair of incompetent coaches and athletic directors, it seems ready to crash and burn into the Division II ranks. Not only has it firmly sunk into the basement of the Big East, but it has become a boring team to watch.

The thrill is gone. The recruits aren't coming. This team is worse than Temple.

The seemingly always angry Paul Pasqualoni inherited a program on the upswing. A team that routinely contended for the Big East title and placed players in the NFL ranks.

Recruiting was strong. Coach Mac had left an excellent base of talent, one ready to step up and contend for the national title. The fans were fervent and frothing.

Pasqualoni had a run of semi-success with stars like Donovan McNabb, Marvin Harrison, and Dwight Freeney. But something key was missing from Coach P. Some spark of imagination.

Perhaps he lacked the ability to win big games. Perhaps recruits didn't respond to his personality. A vague sense of decline filtered through the program and slowly picked up steam until one felt it was a program in not vague but serious, severe decline.

Recruits dried up. The aura of McNabb and MacPherson dissipated. Wins disappeared. Jim Brown and Ernie Davis were distant memories. The team was dismal. Despair plagued the program.

Every big game was a Syracuse loss. Fans came to expect the annual early-season rout. The play calling became painfully predictable. Pasqualoni became a public relations nightmare. Short with the press, disliked by the fans, and ignored by star recruits, he sent the program into a free fall.

When discussion Paul Pasqualoni, I think you always have to take a step back. It's easy to look at the last 3-4 years of his tenure and get caught up in the stink of it. But to fair and balanced, although it pains me to say so, Paul did a pretty decent job for a while here. In Coach Mac's last season, the Orange went 7-4-2. In the following season, Coach P began his career with a 10-2 mark. Not too shabby. He would lead the Orange to five 9-win seasons by 1998 and two BCS (or the equivalent) bowls as well.

As for his recruiting, credit where credit is due, he did snag Donovan McNabb, Marvin Harrison, Dwight Freeney et al. It's not like players went running from SU the minute he became coach.

I will certainly agree that there was something missing with Coach P and he was fortunate enough to get away with it for a while because he won football games. But as soon as the shine wore off in the late 90's, so did Pasqualoni's appeal and then all of the claims the writer makes hold true. And again, to be fair, every big game was not a loss (Michigan, Virginia Tech, Miami, Gator Bowl,) but it's easier to remember the losses (and there were plenty of them).

Coach P. was finally fired. His years of poor recruiting, and a once-proud program in tatters, would be his legacy.

Tatters? That might be a little harsh. He had one losing season his entire tenure and the season he was fired he still took the team to a bowl game. To me, Coach P's legacy is that he made sure Syracuse remained a perennial Top 25 team for the most part but he didn't have "it" to turn us into a national power, even when he had all the tools necessary to make it happen. Like a college football Buck Showalter.

New Athletic Director Daryl Gross hired pro assistant Greg Robinson. Fans were optimistic—things couldn't get worse, could they? They forgot Murphy's Law...things can always get worse. And they did.

The program plummeted. Flat lined. Robinson has been rated the worst coach in the nation by several media outlets. The Gold Sheet (a gambling sheet which rates college coaches impartially) has consistently rated Robinson the worst. Still, he retains his job.

On that, you'll hear no argument from me...

The West Virginia Mountaineers have risen to national prominence.

The Scarlet Knights of Rutgers are roaring along with an excellent head coach and a program with national aspirations.

The exciting Louisville Cardinals are on the upswing, placing players in the pro ranks routinely and pushing themselves onto the national stage.

The Cincinnati Bearcats have promise and have been bowling.

The Connecticut Huskies have excitement, a galvanized fan base, and the aura of a team on the rise.

Pitt, at least, has a pulse.

Shoot me. Calling them the Scarlet Knights of Rutgers makes them seem way more important than they've already convinced themselves they are. I'd advise against it. and for the record we did beat Louisville last year, so they can't be doing THAT great.

The football program seems doomed. No players were taken in the NFL Draft this year. Also, the Cuse had yet another poor recruiting run.

First part is true, second part is not. While not exactly brimming with Blue Chippers, the recruiting class was definitely the best in years for the Orange, who somehow convinced some of New York's best players to stay at home.

Its last great stars, McNabb and Marvin Harrison, wind down long NFL careers. No Orange alumni stand ready to replace them on the rosters of the pros. Syracuse football slowly sinks from the pro ranks. The college cupboard has been bare a long time.

I won't mention that to Dwight Freeney or Keith Bullock.

With little fan support and another guaranteed losing season, perhaps it's time to consider dropping Division I football altogether. Retiring not only 44, but every number.

Perhaps at least the Ernie Davis summer movie might be good. His old program won't be. Likely ever again.

And this is about where we went off the rails... Likely ever again? I always come back to this, but, Rutgers is horrible for 100 years, has two winning seasons and all of a sudden they're amazing. Syracuse compiles the 14th best profile in college football history, has three bad years and all of a sudden we're destined for failure for the rest of eternity?

Syracuse football is down right now. Very down. About as down as it's ever been. But I think we've watch enough sports, college or otherwise, to know you're always one good coach, a handful of players or a couple lucky breaks away from turning a bad situation around. Thinking that Syracuse is not good right now is correct. Thinking that Syracuse will never be good again is silly.