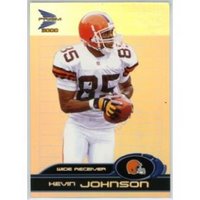 I was a big Kevin Johnson fan when I was at SU. He wasn't as amazing as Marvin Harrison but he was dependable and an extremely solid receiver over a long stretch, something SU hasn't been able to find since (ahem Mike Williams). After graduating SU he went on to play in the NFL, most notably for the Cleveland Browns (4 1/2 seasons) as well as Jacksonville, Baltimore and Detroit. He retired in 2005 with 384 receptions, 4,595 yards and 25 TDs. Not too shabby.

But what's KJ up to these days? Hopefully he's keeping in shape. Or maybe he's putting his degree to work. How bout a little of both?

A company headed by a retired NFL football player plans to construct a 78,000-square-foot fitness center along Route 130 that would have a swimming pool, indoor practice field, basketball court, salon and cafe.

According to plans filed at the township municipal building, Growmark would sell 24 acres of the 32-acre property to K. Johnson Enterprises LLC of Hamilton Square. The company is headed by former NFL wide receiver Kevin Johnson.

Herb Ames, president of management consulting firm Devin Group Inc., is representing the applicant for the project. Ames said the fitness center would be called Team 85 Fitness and Wellness. Johnson's jersey number was 85.

Bordentown, get ready to be Johnson'd! Wait, that doesn't sound right. According to the website, the facility will be a one-stop family fitness center and will open in 2009. Bordentown is nearby to Johnson's hometown of Trenton and according to Herb Ames, "The demographics show that there is a need for wellness in the Bordentown area." So for all of you Bordentown folks who we hoping for a little more wellness in your life, give Kevin Johnson a little fist-bump next time you see him.

While Kevin's football playing days have officially passed, there's one SU football alum who's keeping things alive. That's Emerson Kilgore, former offensive lineman. By day, Emerson uses his opposing size for the forces of good. Working at the Tides School of Pawtucket, which works with at-risk children. Emerson's role is, shall we say, rather obvious:

Tom Stott, the principal, met me at the door. There are 17 students at this branch of Tides — with slightly fewer at branches in Providence and West Warwick — and for the size, the effort here is impressive. They have a committed staff, including Emerson Kilgore, 29, who played football for Syracuse and is now on an arena team out of Worcester called the New England Surge. I was told his enormous size can be helpful in convincing students not to fight. He would be today’s graduation speaker.

Maybe he should back to SU for a while. I'm told his enormous size could be helpful in convincing current SU players not to lose.

At night, Kilgore is a menace to the good people of New England. He's a member of the New England Surge. The Surge are part of the Continental Indoor Football League, a kind-of Northeastern/Midwest Arena Football League. The Surge were the #1 seed in the playoffs this season, albeit because the #1 team was "suspended from the CIFL." Yikes.