Don't Roll Out The Orange Carpet Just Yet

Share All sharing options for: Don't Roll Out The Orange Carpet Just Yet 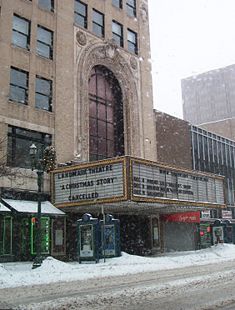 I've been told by SU folks the world premier is going to be at the Landmark Theatre in Syracuse. No red carpet. Instead, the orange carpet will be rolled out.

That was Donnie Webb back on April 28th and it sounded like great news. Of course, it would have sounded better if it were actually, you know, confirmed. Cause today Donnie let us know that those folks who said the premiere was definitely happening were jumping the gun just a tad...

Universal Pictures and Syracuse University are working to bring the premiere of the motion picture "The Express" to the Landmark Theatre in downtown Syracuse this fall.

Gary Fleder served as director of "The Express" and said there are conversations taking place between the studio and the university about having "a big world premiere at Syracuse University. I haven't gotten official confirmation, but it's in the works."

"While plans have not been finalized," Quinn said, "we hope to have an event celebrating the life and legacy of Ernie Davis in Syracuse some time in the fall around the release of The Express. We'll make specific details available as soon as possible."

In order to make the event happen, the Landmark will have to get an entirely new movie screen, projectors and sound system that will cost well over $100,000. You're about to find out just how much swagger SU has in town as someone is certainly going to foot that bill...the question is who?

Might be a good idea to put Plan B into effect. Might I suggest, and just go with me on this, projecting the film onto the side wall of SkyBarn and doing the premiere al fresca under the moonlight. It's unique, it's a great way to watch a movie and it's instant national cache for South Campus. Lambreth Lane will be as sought-after an address as Rodeo Drive. Give or take.