Share All sharing options for: Damn You, Zone Defense! 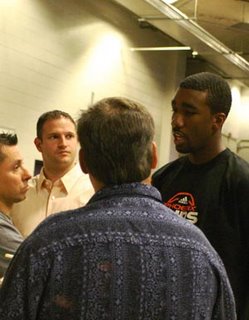 It's a busy time for Donte Greene. Coming off a week where he traveled to Phoenix and Milwaukee, he's now preparing for a week where he'll be traveling to Charlotte, New Jersey and New York City. It's all part of the "fun" for a potential first-round pick looking to prove to teams why they should use their draft selection on him and not some white guy with a wispy mustache from Latvia (Gerry?).

But this isn't just to show off what a physical specimen Donte is. It's also about getting to know this young man they're about to invest millions of dollars into. They're here to do their homework and find out if he's for real. Like, for instance, are the knocks on Donte's defense warranted?

Not so!, says Master Greene. T'wasn't I, it t'was the zone defense!"

Question: Taking part in these workouts over the upcoming weeks, what are you most looking to show these teams?

Greene: My defense. At Syracuse, we played a zone, but I’m really looking to show that my man-to-man defense is pretty good also. Playing a zone kind of hurt me this year personally, so I just want to show I can contribute on that end of the floor.

Hey, I get it. The first rule of pre-draft is don't say anything negative about your game. At all. Nothing. If someone asks if you could cure cancer, you say "it's something I've been working on and I really feel like I can make it happen at the next level."

So how does Donte see himself going in the draft anyway? Does he think he'll even be available for the Suns at #15?

Well personally, you always feel like you’re top five, but this is definitely the range we’re looking at. I’ve heard anywhere from six to 15, but for me it’s really just about focusing on working hard. If Phoenix ends up being the ones calling, I’ll be more than happy.

Sixth? Whoa, whoa, whoa...sixth? Who's mock draft was that, yours?

I love The Orange Squeeze's response. "...if you were a top 10 pick why work out with eleven teams?" He's got you on a technicality, Donte.