Share All sharing options for: Best Not To Bring Up The Slovenia Incident In The Rautins Household 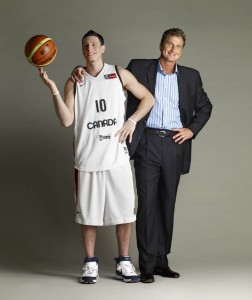 Andy Rautins and his surgically-repaired ACL are currently doing what they can to make the Canadian National Team, get Canada qualified for the Olympic Games and then compete in said games as hard as possible in an attempt to win a medal. It's all just a little disconcerting for Orange fans who need so desperately for Rautins and his cohort Eric Devendorf to come back as strong as possible.

But, hey, who am I to say the guy can't play for his country on the biggest stage in the world? Especially when you're trying out for a team coached by your Dad. I'd say the chances look pretty good for you going in. I know if it were my Dad and I were trying out and I was at least capable, he'd have a helluva hard time saying no to me. Then again, my Dad isn't Leo Rautins.

His job's not made any easier by the fact one of the players battling for a spot is his son Andy.

But when it comes to the Canadian team, Rautins insists he's a coach first and father second.

"That's part of the delicate line that you have in this situation, but you compromise your relationship with your other players," Rautins said. "Everything is compromised if you do something for the wrong reason."

Fair enough. So how is the elder Rautins going to base his decision?

"If it makes our team better, that's the decision you make," said Leo Rautins, who was hired as the men's coach in 2005. "He knows it, we've been around together long enough.


"Two years ago we were in Slovenia, and something happened that I didn't necessarily like, and I looked him right in the eye and said 'Understand something, one of us won't be here. Either you'll get cut or I'll get fired, but I won't get fired because of you."