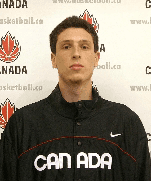 The last time we left Andy Rautins in the care of the Canadians he came back to us all busted up and broken. We rebuilt him. We had the technology, We made him better, stronger, faster.

And now that he's healed up and ready to focus solely on returning Syracuse to its former glory, what does he go and do? He goes and plays for those damn Canadians again.

You know what they say..."You can take the boy out on Ontario and give him a basketball scholarship and an unlimited supply of Sal's Birdland Wings (and Sassy Sauce!) but you can't take the Ontario out of the boy."

Rautins' son Andy has also impressed enough to make the team. Andy Rautins, who will turn 22 in November, is the second-youngest player on the team.

Additionally, he had not played organized basketball all year until just before training camp. He tore his anterior cruciate ligament playing for Canada last summer.

"It's really gratifying to know if you work hard," Andy Rautins said, "good things will happen."

Of course, Rautins will be playing for his father, Leo. And with such kind of words of encouragement awaiting him all summer, it's no wonder he jumped at the opportunity.

Now, Canada isn't in the Olympics yet. They begin a three-team exhibition tournament today against Lebanon and New Zealand. They then head out to the FIBA Olympic Qualifying Tournament in Athens, Greece. In that tournament, held between July 14-20, three teams will emerge with newfound Olympic bids and, God willing, no newfound ligament injuries.