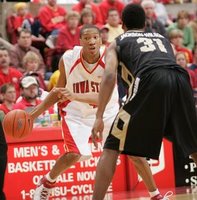 A few days ago, junior-to-be Wesley Johnson informed the school he would not be returning to play basketball for them next season. It was a surprise to say the least:

"Shocked would be the best way to describe my reaction," [Iowa State men's basketball coach Greg] McDermott said of the phone call he received from a Johnson family member last Thursday night saying that Wesley was seeking a transfer. "I flew Saturday morning to his hometown () to talk, but his mind was made up."

It was unclear at first why Johnson, who averaged 12.4 points per game last season despite missing five games with a stress fracture, wanted out. A Big Ten All-Freshmen team player the year before and the team's 2nd leading scorer, Johnson may developed a rift with the coaches that was no longer fixable. According to the Des Moines Register, it was "an eroding relationship with McDermott" as the reason behind his decision to leave.

ISU has granted him a limited transfer release, with the conditions that he not go to a school on a future ISU schedule nor any Big 12 school. Johnson submitted a list of schools that met the criteria and there's one in particular on it you may be interested in:

According to Des Moines Register, various schools on and off that list had already contacted ISU about talking to Johnson, including Arkansas, Cincinnati, Marquette, Virginia Tech and West Virginia. No word from just yet on their reciprocal interest.

So is this guy any good? I'm still checking. Over at Clone Chronicles, it's clear that Johnson was good enough to inspire hope in the fans but his transfer is just the latest in long line of disappointments for the program...

This may have been the cruelest of them all. Here was a kid who came out of nowhere who suddenly was dominating at every position he played. He was an athletic freak who could out jump the big guys and out shoot the guards. The type of player who could be the difference maker or the spark to reignite a program. It was just a week ago that I looked at who was coming back in the rest of the Big 12. Despite all of my built-in defense mechanisms I actually began to think that maybe we could actually get into the top half of the conference with a few breaks. "If Wes could stay healthy, if Lucca is as good as people say, if Brackins develops...if, if if."

And so we wait. At least in the meantime, we know two things...