Share All sharing options for: Orange::44 Is An Absolute Magician 12.0

The latest incarnation of the TNIAAM/Orange44 chronicles is here. I asked Brian over at Orange44 about the Lax Final Four (which he attended) as well as some non-Lax Final Four questions (for things he did not attend this weekend). Here goes... 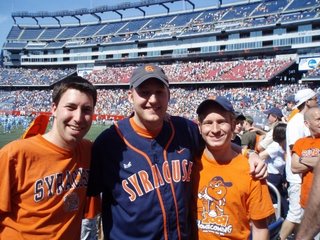 TNIAAM: You were on hand for Syracuse's 10th lax national title, what was it like to be there?

BRIAN: It was great. The stadium was full of Syracuse fans and the parking lot was a fun mix of 'Cuse fans, random lacrosse fans, and families. At one point I played beer pong with my friend against some players on the Drexel lacrosse team. But really, the games were a lot of fun and exciting. The Virginia game especially, the entire section was full of Syracuse fans and everyone was throwing high fives around and hugging. It was magical.

The Championship was great too. The section I sat in was loud, everyone was into the game, and it was a fun game to watch even if you were not particularly rooting for Syracuse or Hopkins. Because the game was not as tense as the Virginia game there was a certain pleasure in just watching a great lacrosse match. There was the feeling that Syracuse had the game locked up with about three minutes to go, so it was fun to see them run out the clock and start the celebration. Like I said on my blog, if you get a chance to go to the Lacrosse Final Four, even if Syracuse is not playing, take the opportunity to go with some friends because it is a blast.

BRIAN: I think it actually was all three of those things in that exact progression. Seeing as Duke was the #1 seed there is obviously a part of you that says wow, it would be much easier on paper to not play the most favored team. Therefore, in that regard we did not want to play Duke. But then you feel like you should play the best team and if you earn the championship then there is no question you are the best team. So I was a little disappointed that we would not be playing Duke. But then I realized that Syracuse/Hopkins is one of the best and historic rivalries in college lacrosse. Plus there were the Hopkins connections to the 1983 Championship as well. It is a lacrosse fans dream match. After all that, it turned out to be the perfect match for the Orange to play.

Step four is then celebration because Hopkins now has fewer championships that Syracuse does. 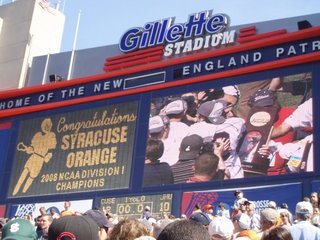 TNIAAM: Syracuse has clearly made their case as Team of the 00's so far, right?

BRIAN: 2000, 2002, 2004, 2008. Sounds about right to me. Hopkins and Virginia each have two titles in the era, but that is still two less than Syracuse. Even if either team gets one more they still will not have that many in the 00's. I think that locks it up for the Orange. If anyone wants to make an argument out there that it is some other team they can feel free to send it along, but the proof is in the hardware.

TNIAAM: Too early to start thinking about Championship #11 next year?

BRIAN: Yeah, I think it probably is. DBren, Leveille, Carrozza, Loftus, Brady, Guadagnolo, and Brooks are all gone. Those were some excellent players for Syracuse this season. Leveille and Brennan might be too much to replace for at least a year. However, clearly there were some top notch freshmen that stepped up big this year like Keogh and Miller. Plus it is not like Syracuse cannot recruit well.

On top of that, Syracuse started the year as #11 on the preseason poll. So what do any of us really know at this stage of the game? I have a feeling they will at least make it back to Foxborough. After that, I will reserve judgment until next season starts.

TNIAAM: Northwestern was just too much for the women's lax team in the Final Four. How do you sum up the women's season?

BRIAN: Much like the women's basketball team, another women's team at Syracuse has the best year in the history of the program. Getting to the Final Four for the first time is no easy feat, and Syracuse did it. Let alone the fact that this is the first time both the men's and women's lax teams made the Final Four. While the team was great last year, winning the Big East Tournament in the Carrier Dome, I think this season was more of a success because the ladies won the regular season, the Big East Tournament at South Bend, Indiana, and then still made the Final Four. I have a lot of respect for the program and what Gary Gait has done to lift the program just that one notch further. He just has one more hill to climb and that is actually getting that National Championship. The ladies should be very proud though after getting to the Final Four, setting the record for wins in a season at 18, and generally playing very well all year.

TNIAAM: Early pollsters are saying the Big East is going to be a monster this season in basketball but they don't seem to think Syracuse will be in the upper echelon. Fair assessment? Is UConn really going to be THAT good?

BRIAN: First off, I always find it difficult to truly judge UConn before the Big East schedule because they play the likes of Quinnipiac, Sacred Heart, and CConn (that is Central Connecticut State University if you are unfamiliar with Connecticut). In other words, UConn's non-conference strength of schedule, much like in football, is a joke. UConn will probably be good again, as for how good I cannot say, and frankly I do not think any professionals will be able to tell either, until the Big East rolls around again. I just have a gut feeling they will not be as good as everyone thinks, but then again maybe that is just wishful thinking on my part.

As for the conference and where Syracuse fits, I still maintain that we will be in the top eight at the very least. Now, that being said, much like last year I think that the eighth team could beat the first team and the like. The league is competitive which means that any team can win in any game. I think after the top two or three teams in the league, teams four through 12 will probably be interchangeable in terms of potential and talent. All the teams have legitimate stars and star power, and any team will have one or two players that could take over a game and carry a team to victory. Syracuse clearly will be competitive in the league again with our newly returned outside shooting. The freshmen will be a solid edition, and we basically have the potential to go far in the NCAA Tournament next season and win some big games during the year. As I said at the end of the season, no one should panic about Greene leaving and no one should have any reason to believe that Syracuse will not finish in the Top 25. Syracuse has the personal, it just depends on if they have the will to win or not.

Maybe Boeheim should get a couple pointers from Desko?