Desko Is Gettin' Some Denero

Share All sharing options for: Desko Is Gettin' Some Denero 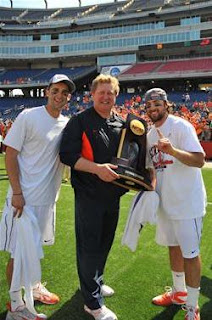 With so many national titles and such a storied history, Syracuse lacrosse fans tends to take certain things for granted. We like to assume (with good reason) that we'll be in the Final Four every year. We like to assume that we're going to get some of the best players in the country lining up outside the Dome to play for us. And we also assume that our coach isn't going anywhere cause, well, why the hell would he?

Not that anyone was gesturing that four-time National Champion John Desko was thinking about leaving. But you want to make sure a coach like that is taken care of. You know, at least the same way you take care of coaches with, um, less worthy credentials.

Amidst the celebration yesterday, DOCTOR Gross confirmed what no one really thought was a big issue until after it was already resolved...Desko is gettin' paaaaid:

After Monday’s game, Syracuse athletic director Daryl Gross was having his picture taken with Desko on the field after the game and joked about some contract bonuses his coach hit by making it to championship weekend and winning a national title. Gross said since he arrived three years ago he’s wanted to lock Desko down on a long-term contract, and they finally "dotted the I’s and crossed the T’s" late this season.

He wouldn’t go into specifics about the deal, but he did give Desko a huge vote of confidence.

This morning, Colin Cowherd was saying (Sorry, Stern was on repeats, I needed something to listen to...) that you never want to be the guy who follows the guy (i.e. Aaron Rodgers after Brett Favre, Ron Zook after Steve Spurrier). It's an almost no-win situation unless you can live up to the success that preceded you, which is usually impossible. I'd say John Desko has officially done the impossible and for that it's nice to know he's being rewarded.

"He’s a great coach. He had won three national titles already. You don’t just win national titles falling off the bus," Gross said. "He’s done an outstanding job. He’s a champion. He knows how to win championships and he proved that again today."


Gross should know. Greg Robinson has been "falling off the bus" for three years now. Nary a title to show for it.