Share All sharing options for: At Least Sombody Finally Noticed 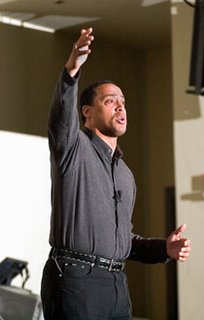 You know what Syracuse football is missing? A vocal alumni base that praises the program when it can but also keeps the program in check when needed. We don't really have that motivating, respected voice, unencumbered by loyalty to the athletic director, that we can count on to keep things in check. I guess most programs really don't have that either, but in a time like this it could certainly go this way.

Who's gonna do it? Jim Brown? His concerns are a little more big picture. Larry Csonka? He's busy fishing. Donovan McNabb? Too nice. Marvin Harrison? Um...let's keep moving for the time being.

Well how bout Don McPherson? The College Football Hall of Fame candidate might not have called down the thunder on Greg Robinson in a recent interview with the NY Post, but he certainly made a couple statements worth noting:

"Greg Robinson is the right person if everyone around Greg Robinson, including fans and alumni, really step up and support Greg Robinson," McPherson said. "He has to hear what people have to say and pick and choose what parts of that he wants to listen (to).

"When he came in and coach Pasqualoni left, there was a huge void that was created, especially in the New York metropolitan area. I was talking to a junior college coach, one of my old coaches from high school, and I asked that question, 'Are we doing OK down here? Are our coaches down here recruiting?' He said, 'They're here, but coach Pasqualoni used to come in and sit in the office and have lunch.

"They don't know these guys."

Would have been good to hear something like this a little sooner but it goes a long way for someone as respected as McPherson to voice his concerns and share a little inside info to back it up. I'm not quite sure exactly what "Greg Robinson is the right person if everyone around Greg Robinson...really step up and support Greg Robinson" means. It's like a mobius strip statement, but I suppose the point is made. Greg Robinson is the right guy for the job until he isn't. And to many, that time has already come.

One note about the article that I had to mention. Loved this paragraph:

By the time McPherson was a senior, the quarterback was the first recipient of the first Johnny Unitas Award and Syracuse had posted an 11-0-1 record that probably would have been 12-0 if former Auburn coach Pat Dye had shown any, uh, guts in the 1988 Sugar Bowl that ended in a 16-16 tie.

I love the assumption that had Pat Dye gone for it, there was really no chance Auburn would have succeeded in converting the score they would need to win, but yet he was still a wuss for not going for it. For instance, if I challenge you to jump the Grand Canyon and you refuse, I have the right to call you a pussy.

That said, Pat Dye actually was a pussy for not going for it.