Share All sharing options for: Who Does No. 2 Work For??? 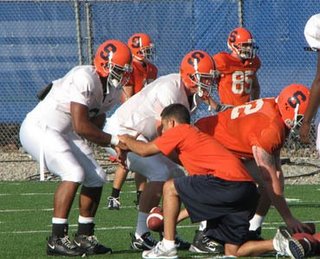 Of the many battles taking place on the Syracuse practice field, you would assume that the quarterback position is one, if not the only one, that's somewhat resolved. But you're only looking at the starter position where Andrew Robinson sits in his ivory tower, judging all that come before him. But what about #2? We're an Andrew Robinson sack away from depending on one of the three caballeros currently vying for that spot. Incumbent Cameron Dantley is still listed as the #2 man but he's getting a decent challenge from redshirt freshman quarterbacks Cody Catalina and David Legree.

QB Coach Phil Earley admits he's got no idea what to do with himself...

There's not any pecking order on the field. It's real close. They're all doing a nice job. The young guys obviously had the furthest to go, even though all of them were in the new offense. Cam understands some of the concepts and really understands defenses and how 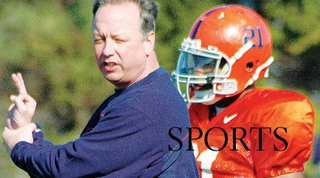 they work. So the young guys have a ways to go. They've done a nice job. They're still miss a few things but they've done a pretty good job.

Good job all around, everyone! Earley then goes on to break down each QB in that way that makes pro drafts so homoerotically-creepy to watch:

Cody Catalina
"He's got really good feet." - Fetish!
"He's about 225 right now, maybe 223 is what I heard." - You heard? Is Cody's weight what passes for hot gossip around the locker room?
"He's just an unbelievable weight lifter. He's in there all the time, mostly for the girls I think." - His name is Cody Catalina, what do you think???

David Legree,
"Here's a kid that has a real nice arm. That would be close to a cannon." - Apparently there are qualifications in order to have your arm be a 'cannon?' I did not know this.
"Boy, he does have a nice arm" - Easy, slugger.

Cameron Dantley
"You know what, Cam is doing a nice job this spring." Nice? Nice? Apparently you think of Cam Dantley "as a woman friend..."
"The thing about it, it's been a big couple of weeks for him, his dad was inducted into the hall of fame ... I think growing up in the atmosphere he grew up in, crowds and stuff, it's not a big deal." - Being around crowds and stuff...the key to Cam Dantley's success.
"He's a very calm kid. But the players love him." - Interesting correlation. Usually players HATE those snot-nosed calm mother-fuckers. Always so calm and shit.