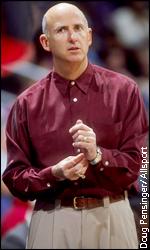 "If a nuclear bomb dropped on earth, two things would survive: roaches and David Falk."

The good news for Falk, and the cockroaches I suppose, is that years from now they will still be able to find shelter from the post-apocalyptic world on the campus of Syracuse University where Falk donated quite a bit of scratch to today.

Sports agent David Falk and his wife have given $5 million to their alma mater, Syracuse University, to help bring star faculty, students and internship opportunities to its three-year-old sports-management program.

The gift, which the Falks will announce Wednesday at an event in Madison Square Garden, is the couple's largest to date. But Mr. Falk, best known for representing Michael Jordan throughout his entire career, says he hopes his "human contribution" will be more significant than his financial contribution. Mr. Falk will serve as an adviser and guest lecturer, and will tap his network of industry leaders to visit classes as well, to keep the program from becoming "too academic."

Like him or loathe him (and believe me, at some point in your time as a basketball fan, you have loathed him), Falk's impact on the world of the NBA and professional sports is the stuff of legend. The man who made Michael Jordan what he is today (I mean the wealthy world icon stuff, not the divorced, degenerate-gambler stuff) will be an integral part of the program as it grows at SU.

For the few of you still keeping hope that Donte Greene will be returning to SU next year, just make sure these two guys don't cross paths on campus, m'kay?