Share All sharing options for: Orange::44 Is An Absolute Magician 10.0

In the battle for immortality, there can be only one. Well, I guess two will suffice. Those two would be myself and Brian from Orange44. Our Q&A series continues...

TNIAAM: Now that you've had a week to reflect on the way the SU Men's Basketball season, did it all make sense or are you nagged by what could have, and should have, been? 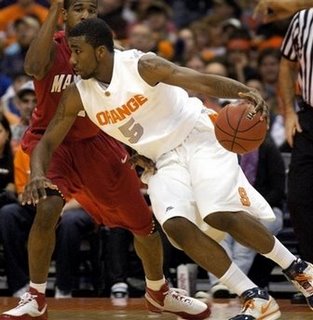 ORANGE44: That was the thing about this team. Every time you had a glimmer of hope that they could overcome the injuries and make the NCAA Tournament. This season was a cocktail of tease and heartbreak. However, was it really that bad? In reality no. With the injuries any realistic fan would have thought that the season was over and the team would not make it so just be entertained by this young team. But fans want to believe that anything is possible in the Big East. And fans bought in. I know I did.

But really, I am not nagged by anything. The youth on the team, combined with our real shooting threats being sidelined, meant that the chances of us doing anything meaningful in the postseason were slim. I just wanted to see some good games, and we definitely did. The game, as well as the game in the Carrier Dome were great to watch. I just wanted to be competitive, and I think they succeeded. However, the , UMass, and to a certain extent Villanova in the BET were too much for any fan to bear.

In the end, it played out with the right ending, but the road to get there was winding and cruel. Occasionally you can be fine with the ending but hate the movie. This is that case.

TNIAAM: SU Lax is on fire. The Men are ranked #1 for the first time since 2004. The Women are tearing up the competition and are ranked in the top ten. Is this the start of a new golden age for the sport here at SU?

ORANGE44: I'm not sure if you can apply the current success of Syracuse Lacrosse with the overall status of Syracuse Athletics. It would be nice to assume so, and have it actually happen, but I just do not see it. However, is it excellent that they are back on top again? You know it. Buy your tickets for Foxboro now, because it is time to get some NCAA fever, for real this time!

I hope this means another 25 years of Syracuse Lacrosse Final Four appearances. Honestly, with the team bouncing back I think they will be solid for at least the immediate future, however with the changing landscape of college lacrosse anything can happen and any team could emerge as dominate again. I am not ready to bank on the fact that everything is all of a sudden now peachy keen in the Athletic Department however. The football program has some proving to do, and anything less than a Sweet 16 appearance next year for the basketball team would be a disappointment in many people's eyes. I'll be on board with your theory if I see at least a six win football season this fall. 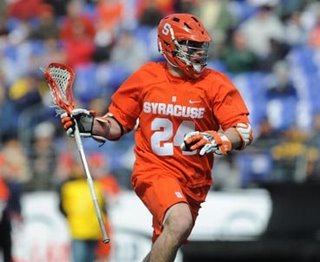 ORANGE44: Personally, I have been and will always be a basketball fan first. I grew up playing basketball and my father first took me to a Syracuse Basketball game when I was in sixth grade. It happened to be the Georgetown/Syracuse game in 1995. I definitely want to see another basketball national championship.

Next, I would say that it is a tie for football and lacrosse. It is like 2(a) and 2(b). While I never became a fan of lacrosse until college I enjoy it quite a bit. is usually very successful at it so therefore I do want that tradition to continue. However, I love college football, and I still enjoy games in the Dome, despite the fact that they are sometimes brutal to sit through. Really, I would be grateful for any success or national championship. However, lacrosse is most likely going to happen sooner than football.

As for what would be better for the university, clearly it would be football, basketball, and then lacrosse. If football wins, a lot of pressure, problems and athletic issues evaporate for . A lot of things could be terrible on the hill for a short while because it will not matter. The sheer shock and euphoria from winning the BCS Championship would keep things tight and right on the hill for a while. Basketball would be next, because Jimmy getting another would be nice, and the fan base loves a winning basketball team. Then lax, simply because we have been there before. A lot. While it is always great and meaningful, it would not mean as much to the school as the other two.

TNIAAM: DOCTOR Daryl Gross seems to be putting a lot of effort into this women's hockey program. Worth the effort or a little misguided when other programs need help?

ORANGE44: Honest question for the readers; how many would actually attend a women's hockey game on the hill if you are around? Me, maybe I would go to one in the first season simply for the novelty and to report on it, but for sheer sporting pleasure or satisfaction, there is no way I will be going to a game there. Plus, I do not support the greater implications that I think this sends. I completely believe that the swimming and diving program got a raw deal and were mistreated. I believe Title IX was a huge cause of this decision, despite what the DOCTOR says and I believe that is completely wrong. While I am no academic, I have authored or worked on several papers and presentations related to Title IX and firmly oppose the effects it has on athletic programs in this country. A similar situation happened to in the past with gymnastics and wrestling so I was not too surprised when I heard this move.

To get off the tangent, it will only be worth the effort if wins a national championship in the first four years of the program. If they do not, I feel it is a colossal failure. Because the swimming and diving team always sent at least two swimmers to the NCAA Championship, by the definition used in swimming was a national title contending team. I highly doubt that will get to the Frozen Four ever, let alone in the first four or five seasons. Plus, it will cost a shit ton of money to upgrade Tennity to make it D1 compatible. They specifically built it at the current size so that they could NOT have a hockey team there. I think that even having the team is a bad move for a lot of reason, but specifically when other teams could use those resources that could possibly content for a title in the immediate future, it is very misguided. But what else would you expect from this department?

When it is said and done I hope I am wrong. You also have to love the credentials of Paul Flanagan, the coach they recently hired. However, it is a far different thing to build a program from scratch. However, I am sure his recruiting is still solid, and he may even pull some recruits with him from St. Lawrence. Either way, it should be interesting to see what happens.

TNIAAM: If you had to guess right now, who is going to be the #1 RB for SU football come August?

ORANGE44: Well, it is usually the standard in football that a starter does not lose his job due to injury. If that is the case, then the job belongs to Delone Carter, as he originally was going to start for the last season. However, his injury was very severe and there is a question as to how good he will be coming back off of it. Therefore, you have to think that it is currently Curtis "Boonah" Brinkley's job to lose at this point. While Doug Hogue was sufficient last season he certainly is no star at this moment. Also, I don't anticipate Averin Collier getting quality touches early in the season. It is quite possible they will see significant action if the current running situation would prove to be pedestrian, but as a rookie I cannot see him being a game breaker right out of the gate. Than again I am not the one in practice seeing these guys everyday. Right now, my money is on Brinkley though.

TNIAAM: Who you got winning in the the NCAA Final Four?

ORANGE44: Well two of my Final Four picks are still active, coincidentally they are the two I have playing for the championship on my sheet. I picked UCLA to win over UNC for the National Championship, and I still stand by that pick. I had and as the other two teams to make it, but is in instead of G'town, and is in over .

I feel like UNC is playing great basketball right now, and with just squeaking in over Davidson (what a heartbreaking game but excellent that Davidson made it as far as they did) they are a vulnerable team that was clearly rattled by how close that game was. Plus there is the fact that this is Bill Self's first Final Four. Also, there is the whole Kansas/UNC/Williams storyline which is not as huge as the media will make it out to be, but never the less it is still present. I see no way UNC loses unless they play awful and plays perfect.

Similarly, I think was overrated all season. They cannot shoot free throws and going up against a very physical team in UCLA I just think UCLA will be better. They are clearly vulnerable to having a bad night however (see versus Texas A&M) and if they stumble, the shooters of will clearly take over. I just think that UCLA is a better team and Kevin Love will show why he happens to be the second best freshman in the nation this season.

So that leaves UNC going against UCLA for all the marbles. I still like UCLA in this game. I think that Love will cancel out "Psycho T" Hansbrough (Why do they keep mentioning this nickname on ESPN? Who cares and I think it is the stupidest thing in the entire tourney this year.) and UNC will have an off night. I have no facts to really back up that particular prediction, but it is just a feeling. Besides, I would rather Ben Howland, a coach who has been there the last two years (mega experience points here that not many people are talking about) over Roy Williams, a coach that has won it in the last five years. Plus, you have to like any team winning it that is A) not from the ACC, and B) not names Duke or . Did UNC even have to get hotel rooms until now? (AP Photo/Kevin Rivoli)