No Rest For The Weary Orange Fan

Share All sharing options for: No Rest For The Weary Orange Fan

So now that we know Donte's moving on, we've reached our daily max for news concerning Syracuse basketball, right?

Sure the season ended two days ago but it's NEVER too early to start talking next year. Just ask ESPN's Andy Katz and SI's Luke Winn who both put out 2008-2009 Top 25's. Katz puts the Orange at #18 in his poll, Wynn slotted the Orange at #16.

Of course both of these were done before Donte's announcement so it will be interesting to see how this affects future versions (for better or worse). Katz has already gone ahead and updated the verbiage but kept the ranking the same:

18. Syracuse
Why? When healthy, the Orange can be an exciting lot with Jonny Flynn making the transition game look rather easy. Syracuse gets back its two top perimeter threats from knee injuries in Eric Devendorf and Andy Rautins. The enigmatic Paul Harris is back, and he is still an untapped resource.

Why not? Still want to take a wait-and-see approach on how the injured-players heal and whether or not the Orange can make stops when it matters most -- something that cost them even at home. Donte Greene declared for the NBA draft on Wednesday afternoon.

It's probably good to also remind you that national runner-up Memphis is on our schedule next season. And apparently that game will be December 20th at Memphis (take it for what it's worth). 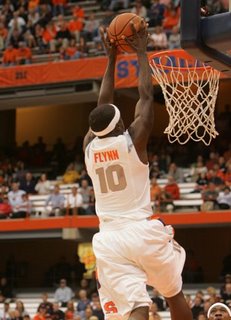 Finally, Donte's departure has opened the discussion for next season's starting five. It would seem that this is what we're looking at.

Then again, no telling what Kris Joseph and Mookie Jones will bring just yet and if Sean Williams will make an impact following his red-shirted season. Let the debate begin...