Much Ado About Nothing

Share All sharing options for: Much Ado About Nothing 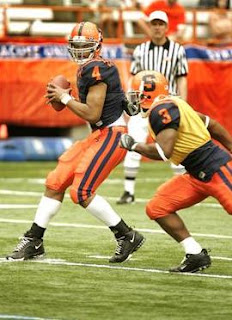 By now you've probably gotten the gist of how the Syracuse spring game went. The overriding opinion seems to be less "Wooo...6-6 this year, baby, I can almost taste it!" and more..."We're going to have a tough time with Akron, aren't we?" There was so much good coverage of the event this weekend, I'm just going to cherry-pick from those who were there and jotted their thoughts down. First up, the Post-Standard's Donnie Webb lays it all out on the table:

Ultimately, spring football is about providing some hope. The two go hand-in-hand. We value spring so much around here after dealing with our winters (saw a great bump sticker the other day that read: Syracuse, Just Shut Up and Live Here), that when it arrives, and it hit 86 degrees in town on Saturday, it's celebrated.

The football Orange didn't provide a lot of hope in the Saturday scrimmage, or, at least you had to reach a little to find your own bit of hope.

Syracuse Football Fever. Catch It! Next up, The Axeman (did you hear? He's got a radio show...)

What I know more than anything is the football on display, and there wasn't much of it as Greg Robinson only instructed his team to run 37 plays between stints on the microphone playing amateur DJ, didn't answer a lot of questions.

It's at this point I wonder if it truly is possible to scoop out one's own eyes with a spoon. Save me from myself, esteemed Post-Standard columnist Dave Rahme:

This was perhaps the strangest spring game ever held on the Syracuse University campus, a combination rock concert/carnival/scrimmage, with the latter supposed to be the main attraction for the 3,428 in attendance. In reality it was the least entertaining element of the three, as it featured only 37 plays.

Maybe the blogging community saw things a little differently. What say you, Three Idiots on Sports?

I was blown away when I went to the snack stand to order my ice cream chipwich and was informed I had a choice of ice cream: vanilla or chocolate/vanilla. Forget winning football games, this is real progress damn't. By the way, I went with the chocolate/vanilla.

Hey, you take your victories were you can get them. Local radio hosts and "Special Coaches" Gomez and Dave certainly left an impression.

"Dave and Gomez were in fact very unnecessary and very annoying." - Orange44
"Another good reason to get Sirius radio." - Three Idiots on Sports

And of course, the one aspect of the day that fans were drooling over more than anything...how did Luna Halo do???

Despite several one-liners from radio celebrates Dave and Gomez and a few by head coach Greg Robinson, the best one of the day was offered by the band's lead singer who implored fans "to buy our CDs, which are available here in the stadium, so we can get gas money home." - Dave Rahme

If there's any one exchange that seems to sum up what happened on Saturday best, I think it's the one between Brent Axe and Offensive Coordinator Mitch Browning:

At one point, Mitch asked me what I thought about the game.

Browning smiled at that response as if to say, "that was the point."

Mitch is new so I'll allow him the facade. But c'mon now, this Greg Robinson-led team has not earned the right to pretend they're Jack Nicholson in Joker make-up smugly cooing "Wait til they get a load of me." Sure, it's not their job to come away from last Saturday with anything other than a little more practice, but ideally you were also there to instill a little hope into a fanbase that doesn't have much left. This is hardly the time to stick it to "all those loudmouths who just whine and don't know what their talking about," which is what Browning's reaction reeks of.

Greg continues to make platitudes about great things are and how they've never been better. I know that he mostly says these things because he has to, what else is he gonna say, the truth? Unfortunately, Greg's already dug himself too deep a hole to start being honest and it's too late for SU fans to start believing anything he says about the status of the team anyway. The only thing that's going to change the way we respond to him and this team is W's. And we've still got a long way to go before we have the chance to see those.

All in all though, one good thing did come out of Saturday. The Orange ran 37 plays.