Guest Post: Why North Carolina Will Win This Weekend

You may know A.E.M. as the purveyor of The Orange Squeeze. But you may not know that he's actually a die-hard North Carolina fan and runs UNC blog The Fifth Corner. With SU nowhere to be found in post-season basketball and the Tar Heels about to play in the Final Four, I thought it was a good opportunity to get some insight into what we'll be watching this weekend.

When one of the best bloggers around, Troy Nunes is an Absolute Magician (Ed. - too kind, too kind), asked me to write about the reasons North Carolina will win it all against what is probably the greatest field ever composed at a Final Four, how could I refuse? So, making sure that I did not miss anything I tried to be as unbiased as possible as I wrote this blog.

Let's be realistic here, these four teams combined for 143 wins against only 9 losses. They all, with the exception of Kansas, have players on the AP All American team, they all have NBA talent on their rosters and if you counted, you would have to say that between 18 and 20 of the players that will face off this weekend will one day play at the next level. That is talent and that is going to be showcased for all to watch. Whoever wins this National Title can truly say they had to beat the best of the best. I do not want to sound like I am making up excuses, but for the two teams that will lose on Saturday have nothing to be ashamed of. 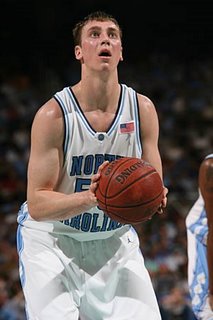 So why do I believe that North Carolina can win it all? I could say because of Tyler Hansbrough, but that would be obvious and the reason that most people would give. I do believe that the junior forward will play a big part if the Heels were to win it all, but I'm not going to hold that up as the biggest reason. I could also say Ty Lawson, the point guard with the speed that few have, but that would be too easy as well. I could say Wayne Ellington and Danny Green, who have become good shooters and are also driving the lane, making them multidimensional and harder to guard, but most people have talked about that angle. I could talk about the best defender on the team, Marcus Ginyard, as the reason why, but that wouldn't be right either. Or I could just talk about Deon Thompson and Alex Stepheson, who have really stepped it up as the other big men on the team, but that isn't the key either. Maybe I could say it will be because of the only senior on the team, Quentin Thomas, who had to fill in when Lawson went down for several games deep in the ACC play, and did a great job. Nope, it wouldn't be him either. So who's left? Oh wait, the Head Coach, Roy Williams, the quickest ever to 500 wins as a coach and the only HC in the Final Four with a National Title. Nope, not even him.

Then who? The answer is: everyone, and if you have watched this team, you would understand why. They have all chipped in to fill a gap at one time or another. When Hansbrough wasn't having one of his 20 point/10 rebound games there was someone else who stepped up, filled the gap and got the missing points. If Lawson was hurt it was up to Thomas to fill in and Ginyard (a wing) to play back up. When Ellington (or the team) isn't hitting from the outside Danny Green (the team's sixth man) comes in and hits the shot to give the team a lift. When Hansbrough was being pounded in the NCAA tournament the duo of Thompson and Stepheson stepped up with a good shot, an offensive rebound or anything that was needed to spark the team. And when a stop was needed it was Ginyard, or maybe Lawson, or even Ellington or Green, to get it. And if not, Stepheson was there to block a shot, or Hansbrough or Thompson to get the needed rebound.

Yes, the reason why this team can win it all is because each of the players on the roster will pull their own weight and then some. Hansbrough has been great, and received most of the publicity of the national media, but if you follow this team you know that along with the young man from Poplar Bluff, Missouri there have been many other contributors to this season's 36 and 2 record.

Against Kansas, the way I see it is pretty simple. If both teams come in with the same intensity, North Carolina will come out a winner. If UNC comes out with more intensity the game will pretty much be over by half time. If Kansas were to come out with with more intensity it would be a tight game, with the possibility that UNC would lose. Here is how I see it position per position.

Now, if Nunes liked what I did and North Carolina (as I predict) is in the final game, I will write up the match up between the Heels and their next opponents.

You can read more of A.E.M.'s stuff at The Fifth Corner for UNC news and The Orange Squeeze for all things SU.