Going Pro Means Never Having To Say You're Sorry

Share All sharing options for: Going Pro Means Never Having To Say You're Sorry 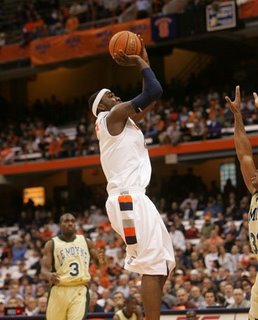 There’s still a chance [Donte Greene] might return to college. Green said he has not yet signed with an agent. His primary focus is preparing for the Orlando pre-draft camp in late May. Then he’ll decide if he wants to stay in the draft or return to Syracuse. Initial projections put him in the middle of the first round after averaging 17.7 points and 7.2 rebounds this past season.

putting the kind of flippant decision-making into this as if he were deciding whether to on spring break in Cancun or Donte mentions that he's in no rush to sign an agent and he's still up in the air about the whole thing anyway. He's apparentlyDaytona.

Let's be clear. Donte is going pro. And to be honest, with everything that's been said since his announcement...would he really want to come back and face an entire fanbase that's second-guessed him? And would most Syracuse fans even want him back?

It doesn't even seem like some NBA folks are that excited about him...