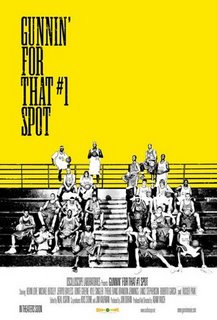 The Express is still months away but if you want the chance to see a film involving a Syracuse athlete, you'll be able to do that much sooner.

Gunnin' For That #1 Spot, due for release in NYC on June 27th, is a documentary about what happened when some of the best high school players in the nation stepped on the same court with each other last year. You'll recognize a lot of the names on the list...Kansas State's Michael Beasley, UCLA's Kevin Love, Arizona's Jerryd Bayless...oh and Syracuse's Donte Greene.

On the corner of 155th and Frederick Douglas Boulevard in Harlem lies Rucker Park. By appearances, the concrete pavement, anchored on one side by its run down slab bleachers, is no different than any other basketball court in the city, but this is the place where nicknames are indelibly branded, and legends are born.

On September 1, 2006, the top 24 high school basketball players in the nation stepped out on this court, that once saw the likes of Wilt Chamberlain, Kareem Abdul-Jabbar, and Dr. J to compete in the first annual "Elite 24" all-star game. GUNNIN' FOR THAT #1 SPOT follows eight of these players as they prepare to showcase their skills at the most legendary playground in the world.

The film is directed by Adam Yauch, a.k.a. MCA from the Beastie Boys (WTF?). Greene is one of the eight players profiled in the film. I wasn't able to locate much footage of him but I think he shows up in the background making a pass in this short clip featuring Kevin Love:

No word yet on when it will play outside NYC but I'll keep an eye out.

HT to Nicole who let us know that "June 27th the movie's going to be in New York, LA, Philly, Baltimore, Phoenix, and Portland. It's going national mid-July."