Why Don't They Call Them The Big Easties Or Something Like That?

Share All sharing options for: Why Don't They Call Them The Big Easties Or Something Like That? 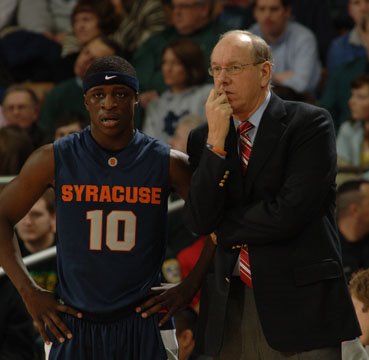 Before the season started, Jonny Flynn and Donte Greene were tabbed a Big East Co-Rookies of the Year. At least one them stayed put.

Jonny Flynn was named Co-Rookie of the Year but this time he shares the honor with Pittsburgh's DeJuan Blair.

Flynn ranks third on the Orange in scoring (15.9 ppg.), led the team in assists (163) and was second in steals (47). He started every game and averaged 36.0 minutes per. In Big East matchups, Flynn logged more court time than anyone else, averaging 39.2 minutes per game.

BIG EAST Player of the Year