UMass, Good Job, Thanks For Coming, Now Let Us Never See You Again

Share All sharing options for: UMass, Good Job, Thanks For Coming, Now Let Us Never See You Again 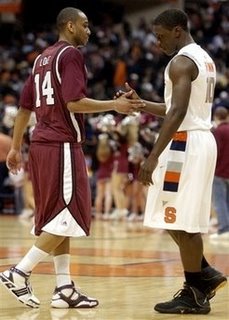 In the latest exchange between myself and Brian at Orange44, the following question was posed to me.

Syracuse is taking on Massachusetts today for a trip to New York. Are they going to the semifinals, or will UMass again beat Syracuse on their home court?

And I quote Syracuse.com's Mike Waters...

In a stunning but yet somehow fitting end to the 2007-08 season, the Syracuse Orange blew a 22-point second-half lead and lost to Massachusetts, 81-77, in the NIT quarterfinals on Tuesday night at the Carrier Dome.

Syracuse led 54-32 with 14 minutes left. According to Slate.com's Lead Calculator, that's a 44% safe lead. While not a sure thing by any means, that's a pretty solid amount with so much time remaining. But of course, there's another 56% out there that say otherwise, and that's what happened.

What can I say? What do I want to say? What's the point? The last five possessions of the game said enough (two turnovers, 1-for-4 from the free throw line and a blocked shot). Unfortunately for the Orange, they decided to play not to lose instead of as if they had nothing to lose. Donte Greene even admitted as much:

And as for Greene, who scored 18 on 6-14 shooting, apparently all that talk about staying at Syracuse for another season may have been lip service after all. When asked if he will be coming back...

I have no qualms with Donte if he wants to make money and go pro, but to go out like that...well...it just wouldn't leave much of a lasting impression. Unfinished business, to say the least.

The big shame of it was that it took place in front of 20,162 fans in the Dome. The fans did what they had to do and proved their ready to support their team. Unfortunately, it was right place, wrong time.

Syracuse ends the season with a 21-14 record. Years from now, it won't look terribly bad but those of us who followed the season will remember the potential that was there. Hopefully, we'll also remember the magical 2008-2009 season that followed it, but at least for now that's just some good old fashion "wait til next year" SU thinking.

Oh and for the record, we played UMass twice this year and only played UConn, Providence, Pittsburgh, Seton Hall and St. John's once. Good job, Big East.