Regulation Is For Losers

Share All sharing options for: Regulation Is For Losers 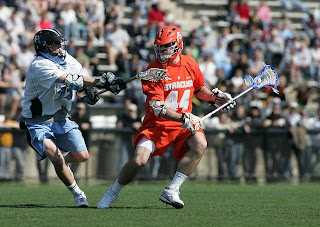 On the Blue Jays home field, SU senior midfielder Steven Brooks bounced a shot through the legs of the Hopkins goalie 37 seconds into the extra frame to cap another wild win for the Orange. But don't be surprised...at least Brooks wasn't. He predicted it:

No. 5 Syracuse has now played three consecutive overtime games for the first time in school history, and Brooks has been in the middle of every one of them. Two weeks ago his goal with 28 seconds remaining sent SU into overtime in this very city against Virginia, a game the Orange lost 14-13. A week ago he rifled a shot between the legs of Georgetown goalie Miles Kass with 2 seconds to play in regulation to force OT, a game Syracuse won 9-8.

After that one Brooks had looked a reporter square in the eye and predicted another overtime affair when the Orange visited Hopkins, a team that had rolled to a 17-9 victory in the Dome last season that wasn't as close as the final score.

Let there be no doubt now in the world of college lacrosse. The Loyola's. Duke's, Hobart's and Navy's are on notice. It was cute and all that you guys took up the mantle of top tier lacrosse teams in the last few years. But that's over now. Syracuse is galvanizing a new world order that happens to look like the old world order. Thanks for the keeping the Final Four warm for us.

The Orange move all the way up to #3 in the latest poll just below Duke and Virginia, both of whom are the remaining undefeated teams in the land. Hopkins stays put at #4, a testament to how well the game was played.

Not to be outdone, the women's lacrosse team decided to get all dramatical this weekend as well, beating Notre Dame 16-13 in overtime. The Orange had a nearly cushion at 7-3 but it evaporated quickly and the Irish led 11-10 early in the second half. Syracuse tied the game up at 13's with about 6 minutes left and that's how regulation ended.

Proving I need an education in how women's lacrosse is played, SU sophomore Halley Quillinan scored 32 seconds into overtime and yet the game continued. In fact, the two teams then played a second overtime period wherein the Orange scored two more goals and the game was finally over. This is all a little like walking up the next morning to find an attractive girl lying next you...you're not entirely sure what happened but you're pleased with the results.

The women's team returns home to take on Towson (5-1) on Wednesday at 1 p.m. while the men's team get the week to prepare for Binghamton's (2-1) visit on Saturday.