Share All sharing options for: Orange::44 Is An Absolute Magician 9.0

In the never-ending battle between good and evil, you can only count on one thing...that when I ask Brian from Orange44 a couple questions, he will answer them... (FYI, these questions were posed previous to last night's NIT game) 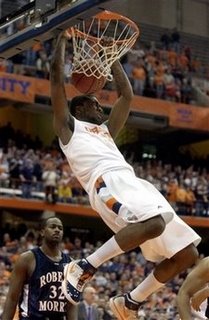 TNIAAM: Admit it, you were watching the NCAA Selection Show hoping/praying that somehow Syracuse's name would show up.

BRIAN: A little. I had pretty much resigned myself to knowing we would be a #1 seed in the NIT. To be honest, I did not even watch most of the selection show, just a touch at the end.

After looking at the resume of Oregon and a couple other teams, we should have had a look though in the committee room, and we probably did not. I have to give props to Coach Knight, Jay Bilas, and even Dickie V. for sticking up for Syracuse. They realize we should have at least been in the conversation with our SOS and RPI. The committee needs to come out and say what they are actually looking for with these teams. Syracuse went out and improved their strength of schedule, and they still got screwed. While they did not win enough games to really be considered, they still should have been talked about.

TNIAAM: Well we're in the NIT so let's talk about it. How do you like our draw and our chances?

BRIAN: The bracket is interesting. We have the home field advantage until we possibly make it to NYC, which is always nice. There are some interesting teams, as Maryland or Minnesota will be the next opponent, and Florida State and Massachusetts are in our region. Additionally, we could potentially meet Florida or Arizona State in New York. Ohio State and Virginia Tech could meet Syracuse in the championship as well. All of these games are potentially exciting, and really, if we have rest between games, I could easily see us going the distance. Being a one seed is always advantageous. I think it could be the case that the NIT Final Four will be more exciting than the "real" one.

TNIAAM: What do you expect the NIT crowds to look like and is it any kind of commentary on SU fans if we don't get the kind of crowds we got last year?

BRIAN: I have a feeling they will not be as big as last season. Is that right? No, it never is. If you support your team you support them down or up. Syracuse has had the "fair weather" reputation as long as I have watched the program and it is sad. People go home early, leave to beat traffic, and the like. I have always said real fans stay the game and it is the truth.

That being said, it does not look good that people will not support this young team as much as last year. They worked harder to achieve the same nineteen wins simply because of the depth and inexperience. This year is perhaps even the best triumph since Syracuse won the championship because they actually managed to make the NIT and win those games with so little. To not support the fact that this team never gave up when the injury to Devendorf happened would be a true disappointment, even more than failing to receive an NCAA Tournament Bid.

TNIAAM: The women's team was rewarded for their season with a seven seed. A justified seeding based on their season or a little lower than expected?

BRIAN: Yeah, it sounds right on the money to me. I think if they had won the first BET game against South Florida they would have had a six or possibly five, but the seven sounds right. This is Syracuse's second big to the dance in the last 20 years and Syracuse has never won an NCAA Tournament game, so it will be interesting to see what they can do against Hartford. They will be playing in Baton Rough, LA, and possibly in Oklahoma City, OK. Hopefully the ladies will pull some surprises and upsets and make the Sweet Sixteen.

To comment on the seeding based on the season, it fits well. They really blew some dunkers, like against Georgetown in DC, as well as the USF game in Hartford. With the number of wins the team had, combined with the big wins they had and the not so good losses, the selection committee did a good job for the ladies this year, not just Syracuse but overall.

TNIAAM: Can we pencil the men's lacrosse team in for the Final Four yet? Are we officially back to the expectations that we had before last season?

BRIAN: I think, pending some collapse and a complete abandoning of the principles that carried them past the teams they have beat, get your pencils ready. When you beat the elite teams in the nation, you have to feel good about your chances of going deep in the postseason. Apparently this team also likes bonus playing time because they cannot seem to win a game without some overtime as of late. Depending on the seeding in the tournament this team could get back to the Final Four which is in Gillette Stadium in Foxboro, MA. This is a small journey from Boston, where I will surely have a place to crash with any number of Syracuse friends. Moral of the story, if you make the trip let me know.

Anyway, I really think the expectations never left. When you have a historically amazing program like ours, the expectations never fall, just the disappointment rises. The last two seasons have been massive disappointments, but the coaching shakeups, game plans, and new recruits have clearly brought the program back to where it should be. I am not saying that Syracuse can go the whole way, but you can never count them out if they make it to Memorial Day Weekend.

TNIAAM: So St. Pattie's Day is one of your favorite holidays...how did you spend it? Assuming you can remember...

BRIAN: To be fair, I started my Spring Break on Friday the 14th, so my sobriety has been inconsistent at best. I am currently writing this from Atlanta, GA, rolling with one of my former Syracuse roommates, Cory, and needless to say we are very Irish and enjoy the fanfare. I also am enjoying not having to read law books. Now that I treat St. Patrick's Day like a season, I also celebrated with most of the working world on Saturday as well.

My friend and I visited a bar to start called Stats in downtown Atlanta, where if you purchased a Guinness you got to keep the imperial pint glass it came in. Delicious. Coincidentally, Cory's girlfriend Adrienne is a graphic designer and got to design the logos for the place. On the bathroom walls there are statistics from every year, and so for 2003 she mentioned the Syracuse Orangemen winning the National Championship over Kansas. Awesome.

Then, after a few rounds and some food, we went to my friend's local watering hole, Fox & Hounds. It is nice when your friends know the staff of a bar, so when you go there you then get treated like a VIP. I spent most of my night singing Irish songs, playing darts (or as we say in MA, fahkin daahts), and drinking Guinness and 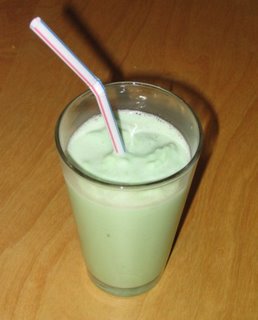 Smithwicks, with the occasional Car Bomb mixed in. Since the brackets recently came out, I also spent a lot of time talking some bracket talk. Because of the blog my friend Cory decided to refer to me as his resident Bracketologist, which I really think is a dirty word. College basketball aficionado will do just fine.

FYI: Atlanta area McDonald's do not carry Shamrock Shakes. The folks in the

south do not appreciate the delicate minty flavors dancing on their pallets. All in all, it was an excellent St. Patrick's Day.

As, for what happened after the bar closed… that's a whole other story altogether.