Share All sharing options for: Orange::44 Is An Absolute Magician 8.0

The latest in a series of on-going debates between myself and Brian from Orange44. Well, not really a debate. One of us asks a question, the other answers. So more of a Q&A. There, I said it, you happy? 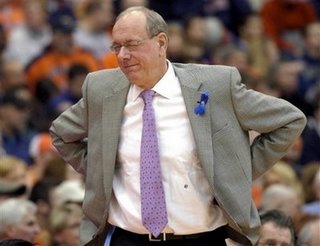 TNIAAM: What the hell happened this past Saturday?

BRIAN: Man, I just get done writing my postgame. It took a lot for me to go back to last Saturday and now you're bringing it up again? FINE!

What the hell happened was a combination of sloppy ball handling, failing to execute on offense down the stretch, and the referees forgetting how to officiate a basketball game. I do not think you can point to one specific thing, as each was a contributing factor to us giving away the ending to the game. Each one not helping the other.

As I mentioned in my Pittsburgh Postgame Reactions, the referees severely blew the end of this game. You can clearly see on the replay that Harris is fouled twice before losing the ball. However, if Paul handled the ball better, or called a time out, Harris would not have been in the position to get a no call. Additionally, there were other turnovers in the last few minutes that resulted in a three point field goal, and a few more points for Pittsburgh, that closed the 11 point gap between Syracuse and Pittsburgh at around the two minute mark.

Also, instead of continuing to attack the basket in a normal fashion, they went into clock kill mode. While I do not have a problem with this, as it is pretty standard operating procedure, I do have a problem with not making a basket when the time closes on the shot clock. Clearly the offensive hotness of earlier in the contest had cooled off by this point, and all Syracuse seemed to make in the last couple of minutes was a Jonny Flynn lay-up and a few free throws. Not good when Pittsburgh seemed to be on a big offensive run.

Turnovers were really a problem with this team. When Pittsburgh implemented their press, it seemed to confuse and befuddle the Syracuse kids that, until that point, had handled every other team's press. They went into panic mode, and thus turned the ball over down the stretch. Thus, they got possessions they should not have, and they closed the gap in quite a short period of time.

Can we drop it now? I'd like to move on so I don't end up drinking bleach.

TNIAAM: So barring a run to the finals of the BET, the men's basketball team is likely not going to the NCAAs again. Is there a long term effect from the Orange not going dancing two years in a row in terms of recruiting and or Jim Boeheim's future?

BRIAN: I think you have to remember, much like everyone else, that this team is not running at 100%. People know that Eric Devendorf and Andy Rautins were on the DL and will be back next season. Plus, everyone will be back (I say that confidently because if anyone thinks Greene is leaving they are smoking something funky). This team will be a threat to go deep in the tournament next season, and will be a team that will be very dangerous to the competition and very fun to watch. Will it hurt recruiting? I just do not see that happening.

If recruiting is not hurt, and Boeheim is still a good coach, what is the problem? Syracuse has had down years before and it did not seem to matter. Case in point, the 2001-2002 basketball season. The team goes to the NIT in the wake of Preston Shumpert and Deshaun Williams, shall we say little conflict. The next season we won the National Championship after landing Gerry McNamara and a fellow named Carmelo. I have a feeling we will bounce back just fine.

TNIAAM: Which Big East teams are going to the Big Dance and who's likely joining SU in the NIT?

BRIAN: You have to believe Marquette, Louisville, Connecticut, Notre Dame, and Georgetown are locks, and just as a bonus pick, I feel that Louisville will get the conference automatic bid. I think Pittsburgh is also most likely in the NCAA as well, although not as certain. I also think that West Virginia is in good shape to bet a bid for the NCAA as well, as their RPI and SOS are top 50. They also have 10 league wins, and over 20 on the season. Chances are they should be in, especially after the drubbing they put on Pitt at home.

That leaves 'Cuse heading to the NIT. Most likely joining them will be Villanova, the team that has been up and down more times than Boeheim's blood pressure. I also think The Hall will get a look by the NIT committee. I doubt, pending a run in NYC that they will be dancing, so chances are they could be a 2 or a 3 seed in the NIT.
Also, Cincinnati could find its way into the NIT with a Big East record of eight and eight. However, on the season they are only 13 and 15, so therefore they will probably be home in March, also pending big things in New York City. 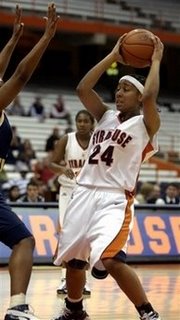 TNIAAM: The women's basketball team showed some significant resolve by whupping up on West Virginia after the Rutgers loss, quick prediction on how they'll fare in the BET?

BRIAN: The ladies are a six seed, taking on South Florida in the first round. Syracuse, during the regular season, beat South Florida down in Tampa 67 to 60. Syracuse should theoretically win this game. That puts Syracuse against the three seed, West Virginia, in the second round. Well, as we mostly all know by now, Syracuse took West Virginia to the woodshed in the Carrier Dome yesterday. So that should be an interesting game in Hartford. Whoever gets past that game will most likely be playing Rutgers in the semifinal round.

It will be interesting to see if Syracuse makes it to the quarterfinals how they will do against West Virginia on a neutral floor. All in all, like I have said before, despite what happens in Hartford, it is just good for the team to get back to the BET. I was in Hartford the last time Syracuse went, and it was great to see the team pull off an unexpected win versus Georgetown in the first round, only to get trounced by UConn. It was certainly a fun little tournament though.

TNIAAM: SU men's lacrosse didn't beat Virginia but they showed that they can hang with the big boys again, how do you feel about the upcoming Georgetown match-up?

BRIAN: I like Syracuse's chances. A lot. Syracuse lost to Virginia, but they still managed to rise in the polls. John Galloway has proven he can handle the big game situation, and is quite solid. Syracuse's offense has proven that they can score and they take big shots. The defense is much improved over last season. Also, my boy Danny Brennan is a top five face-off man in the nation.

Looking at Georgetown, their defense is tough, but possibly too tough. This is a defense that really hits and could commit a lot of penalties, which would be very advantageous for Syracuse in man up situations. Easily their best unit is their Attack, which has the ability to really score. The biggest question will be if Syracuse's defense and goalkeep can stop this attacking unit. While Syracuse will let goals in, they will certainly be tougher than Georgetown expects, and will be in for a rude awaking. I think the team will be expecting patsy Syracuse of the previous year. They will be sorry if they think that. Look for the Georgetown Attack/Syracuse Defense to be where a lot of interesting lacrosse action happens. I give the advantage right now to Syracuse though, ridding high off almost beating Virginia.

TNIAAM: If you could choose one gimmicky halftime performer(s) for the Marquette game that you would stay in your seat for, who/what would it be?

BRIAN: Well this is a hard question. I've always been a sucker for a slam dunk show at a basketball game. Call me the Ugly American, but I like seeing people slam the ball hard. Off a trampoline, even better. (Ed. Note - Slamball!!!) It would be way better then the crap they shoveled out last week. I didn't even get that Snickers bar.

Frankly, I am fine with them doing away with this crap. I love to see the kids playing "Dress Like An Orange", where they run and put on oversized uniforms and shoes and dribble down the court to make a basket. Frankly, I like betting on the kids, and bonus bets for who face plants.

It's the little things in life, right?