74-66 loss to lowly Cincinnati and the women's team saw their 12-game winning streak come to an end in Pittsburgh in a 85-75 loss.

The men got off to a good start, leading 16-7 at the 11-minute mark. Then it got ugly. Really ugly. The Bearcats went on a 28-7 tear and led 35-23 at halftime. The key for Cincy seemed to be cutting down Syracuse's transition game, limiting them to only six fastbreak points. Cincinnati also out-rebounded the Orange 39-32. And yes, the 23 first-half points marked the lowest total of the season for Syracuse. 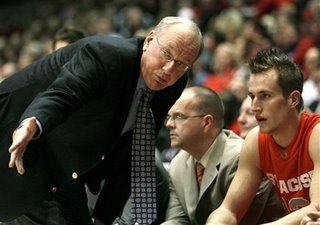 The Arinze show was completely shut down by a tenacious double-team all night. Onuaku scored three points, his season low. Donte Greene scored 19 of his 25 points in the second-half and led a late rally by Syracuse. They got within six points with just over two minutes remaining but couldn't close the deal.

Certainly, the immediate feeling after the game is one of concern. We had finally rebuilt our confidence in the team to where we fully trusted them with a game against a 2nd tier Big East team. Was it false hope or were we expecting too much from a young team in their first Big East road game together?

Axeman sees it as a good thing in the long run:

This team learned in this game that you can't shut it down for a second, especially in Big East play and especially on the road. That may sound like a gigantic "DUH" statement, but for an incredibly young team like this it isn't. They needed to learn that lesson the hard way.

Maybe now a light bulb will come on with these guys that in order to take advantage of their strengths (Chaos) that they need to create those fast break opportunities by playing their asses off on defense.

Don't tell Donte Greene that this was team loss though. He's gonna heap the loss onto one person's shoulders...his own: 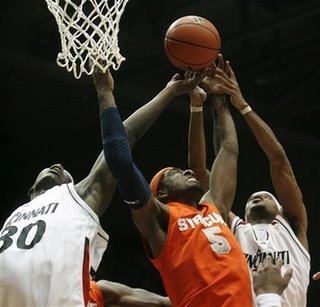 "I feel like I let my teammates down," Greene said later in the Syracuse locker room. "Because I'm one of the guys that needs to step it up, that needs to play to my potential every game. So that's when I think I woke up and started to realize it's go-time. It's time to get back in the game and help my team out."

It's an admirable statement by Greene and one that proves his leadership abilities but there's plenty of blame to go around. Chin up, Donte.

As if the loss wasn't bad enough, CuseAdelphia reports that it was an even worse night for the Orange's RPI ranking. The (12-4, 2-1)

Orange will now head to West Virginia this weekend in a game with a little added significance. The difference between a 3-1 and 2-2 start in the conference is huge for this team. Bring it, Huggins.

As for the ladies, the Orange kept it close with the Panthers for the most part but just couldn't catch up in the end. Leading scorer Chandrea Jones was held to three points in the first half but was able to finished with 19 points and six rebounds while forwards Nicole Michael and Fantasia"Not Preggers" Goodwin finished with 16 points apiece.

The women head to South Florida this weekend for a chance to start up their next winning streak.