People do stupid things in college.

Those who were there during the 1998 Labor Day Storm know what I’m referring to, but that weekend the city and the campus were hit by a deracho that killed three people, leveled trees, ripped the roofs off of South Campus buildings and shattered many a car window, including mine. What was I doing during all of this? I was drunk, running around the parking lot at shouting at the sky. Mind you, this was after a heated two-hour discussion between my friend as to whether or not NASCAR is a sport (I began the argument against yet somehow ended up defending it by the end. We drank a lot of Meister Brau that night.)

I paid for my insolence the next day in the form of a new windshield (my poor '89 Jimmy never knew what hit it) and a newfound sense of the athletic abilities of people who drive cars in circles. I learned a valuable lesson about wind velocity, debris and the frailty of the human form and I am a better man for it today. That's what college is all about, right? Learning from your mistake? 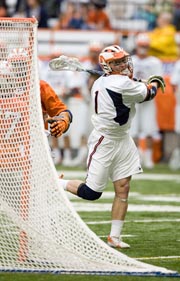 Hopefully that's the case for Pat Perritt, John Carrozza and Sean McGonigle who were all re-admitted to Syracuse University and as such, will suit up for the men's lacrosse team this season. In the wake of the news that the OCC transfers who where coming to save us will not be a part of the program this season, this is pretty good news.

You may remember Perritt and Carrozza from their work in their televised apologies last year after they were both arrested after a fight in Armory Square. The two were charged with misdemeanor charges of disorderly conduct and resisting arrest. Each player received a two-game suspension before they sat before the SU Judicial Review board:

Eventually, Perritt and Carrozza had their cases heard by SU's Judicial Review Board. That board decides the fates of students accused of wrongdoing independently of a court of law. It appears that Carrozza was suspended from school for one semester by the Board and Perritt for two, a decision that was being appealed by his attorney...Judge Vanessa Bogan agreed to dispose of the cases against Perritt and Carrozza with adjournments in contemplation of dismissal. That means disorderly conduct and resisting arrest charges will be dismissed in six months if the two avoid further trouble.

As for McGonigle, seems that his suspension over a fight with a fellow SU student is over as well.

Donna Ditota notes that Perritt and McGonigle practiced with SU Tuesday morning while Carrozza is scheduled to return to campus shortly. Let's keep those hands on our sticks and off the faces of your fellow Syracusians, boys. In the post-Duke Rape case world, the behavior of lacrosse players is under the microscope. Let's not give anyone reason to notice us for anything other than what happens on the field.