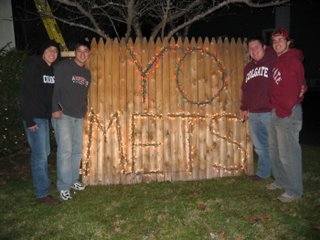 It's one of life's unsung bonuses of growing up in the New York area and becoming a Syracuse student. Realizing that all of your Mets gear can double as Cuse gear, and vice versa. Blue and orange becomes not only the two colors you try to match your wardrobe to but part of your identity too. I suppose if you're an Islanders fan as well it's even more so but I grew up in Jersey so, nuts to that.

I guess it never occurred to me that Syracuse would make a good fit as the Triple-A home for the Mets. I figured it made perfect sense for the Blue Jays given the proximity. But, if not the Jays then I suppose one of the New York teams or Pittsburgh would be the next best fit. And so, segue complete, all that talk about the Chiefs changing their affiliation next year to the Mets is starting to make sense to a lot of people, namely Sen. Charles Schumer and Mets owner Fred Wilpon.

"I don't want to come close to making people think it's a done deal," [Schumer] said. "But it's something that's on the table."

Being the terrible Mets fan that I am I didn't realize the current Triple-A affiliate is in New Orleans (WTF? Where have you gone, Tidewater?) Now that you mention that, Syracuse makes a whole helluva lot more sense. Especially when you throw in the Double-A Binghamton Mets and Single-A Brooklyn Cyclones, the inclusion of Syracuse would give the Mets a veritable minor league Axis of Evil, hellbent on dominating the baseball landscape of New York State. Suck on that, Yankees.

For those not in the know (i.e. me), the Chiefs were the a Yankees affiliate up until 1977. They've been with the Blue Jays ever since but there have been overtures about ending that relationship the last few years.

The "dick move" of all this would be the Mets leaving New Orleans only two years after partnering with them. So much for helping rebuild the Post-Katrina New Orleans community.

But you know what? If the deal does go down, the Mets can just re-purpose Syracuse's "New York's Team" taxi billboards with a Mets logo and a photo of Duaner Sanchez. Win-win!