Share All sharing options for: Orange::44 Is An Absolute Magician 5.0

I ask the hard questions. Brian from Orange44 gives the hard answers.

No wait, that doesn't sound right...


TNIAAM: You asked me last week if it was time for SU basketball to panic and I deflected. Post-Georgetown loss...same question to you.

BRIAN: Yes, sadly I think it finally is. As many people have discussed, the schedule of Big East games of 18 is really three sets of six games. We only managed to win three out of the first six, and we start the next with a loss. A very tough loss. A demoralizing loss to the biggest basketball rival we have. Currently with only 11 Big East games remaining, that leaves little room for error in getting some resume building victories. While there are 11 games to get the six remaining wins to achieve the alleged goal of Jim Boeheim of nine wins, as we have seen, there are no givens with the Big East this season, at home or away.

The good news is that five of the remaining games (Providence, @ DePaul, @ USF, @ Notre Dame, @ Seton Hall) are considered easier. While none of these games are slam dunks, they certainly do not have a number next to their name. The bad news is that the other teams are serious competition, such as Georgetown again, Villanova again, Louisville, Pittsburgh, and Marquette. Syracuse, to build a proper resume to even be considered for an at large bid, will have to play hard and be virtually error free (and make some free throws) for that to happen. As the Georgetown last possession proved, there is no "Gerry McNamara" on the team currently, and save the St. Joe's game, chances are those games that rest on a possession (such as URI) will not be going in the favor of the Orange, save some miracle. The same argument could be said for a Big East Tournament run, but I'm not ready to say that yet.

TNIAAM: If Eric Devendorf is still in the line-up, is our record any different?

BRIAN: I completely believe now that yes our record would be different. There is no doubt in my mind that a credible three point shooting threat, other than a freshman, would greatly increase the inside scoring opportunities for the Orange. It is a principle that can be applied in the same way, for illustration purposes, to Syracuse's 2-3 Zone. When a team is shooting well from long range, it forces the zone to either extend, allowing for more inside scoring opportunities, or switch to man-to-man, which allows exploitation of mismatches or different looks of penetration.

Also, with a more reliable shooting guard on the floor, chances are that at least one player between Devendorf, Greene, and Flynn, will be on and making shots. The team shot 33% from long range in the Georgetown game. Most likely, with Devendorf shooting 41% for three pointers this season, chances are that that the team percentage would rise and more points would have been on the board.

TNIAAM: Ultimately, would a humbling NIT finish for this team actually end up being a good thing in the long run? Especially if it entices Donte to return and make good on his expectations? 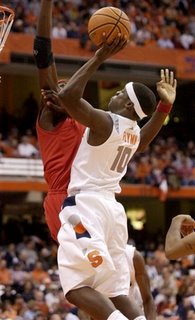 BRIAN: Any scenario where Greene and Flynn, as well as the others, stay on the team is a good one. Leaving the Verizon Center after the Georgetown game, literally every group of people I overheard was saying that they hope "that Flynn kid goes pro".

Other people in the Big East know that these guys are talented and special and they are afraid to play them. When the team rebuilds, adds other blue chips freshmen, and then competes, they will be a force to be reckoned with.

This may be the first year in a while, if ever, that the women will probably make the tournament and the gentlemen will not. Either way, the more humble the finish, the more likely it is to be cutting down the nets next season. The NIT I think would be a good thing. However, I would feel bad for all the seniors at SU.

TNIAAM: The women's team keeps on winning. What's the mood on them on campus for all of us expats?

BRIAN: I think it is a mixed bag. The first school of thought is really "well it's about time". Most people thing with a program, name, and facility like Syracuse the team should have been great like the men a while ago. As part of my stint in the Sour Sitrus Society I had to go to women's games and I've seen them progress from the 2001-2002 season. While they have improved every season, after three years of top 25 recruiting classes, it appears to be paying dividends.

On that line, there is a school of thought that anything BUT being ranked is underachieving with those recruiting classes.

Generally though, people seem to be happy and excited for it. Though that doesn't mean people show up for them unless they play UConn.

TNIAAM: Supposedly Northeastern is filling the final spot on the 2008 football schedule. What teams aren't on any upcoming schedules that you would like to see the Orange play? 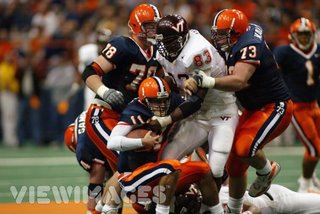 BRIAN: Just in general, I have never understood why a rebuilding franchise such as Syracuse would play the likes of Texas, USC, Boston College, or Penn State. Wouldn't you think you would play some lesser capable teams in the non-conference (say a UConn schedule perhaps) to get some non-conference wins and some confidence, then play the Big East? The Big East is hard. I mean the last two years have proved the Big East is still as great BCS conference, despite what certain people at ESPN think.

To answer your question though, I would not mind, as I thought it was going to be, a Villanova or Georgetown. Some 1-AA team that plays in the Big East for basketball would be a nice addition I think. Especially seeing as it is standard operating procedure for Rutgers and UConn, so who cares right?

Other than that, Syracuse is already scheduling the teams I want to play again. This would be Penn State and Boston College. However, I wouldn't mind seeing a Miami game again. While they killed us in the past, I remember the days with McNabb and the rivalry that used to be there. Plus, "The U" is not as awesome as it used to be, so it could be a game. Similarly I would love to see Syracuse play Virginia Tech again. While I would not enjoy traveling to Blacksburg again to see Syracuse get trounced, I would enjoy seeing that game again. On a side note, I enjoy how every ACC Championship game in football is really a Big East game of four years ago. Also, I would like to win one more game against Temple, as we blew the last one we played against them. This is simply for personal feelings of regret and lost opportunity left over from the Coach P era. Temple would be a nice fit though, as they are moderately good competition.

Moral of the story, I guess I just yearn for the Big East of yesteryear.

TNIAAM: Do my beloved Giants have a chance in the Super Bowl?

BRIAN: Any given Sunday, my friend. The New York Football Giants only lost to the Patriots by three in the regular season, and that game came down to a final drive that involved several penalties and circumstances that could have broke either direction. It is very possible that the Giants will pull out a big win for the Great State of New York and all of the other fans of every team. Really, the Giants are playing for every fan that is not a Pats fan. With the Red Sox winning, and the Celtics doing so well, the Giants NEED to win. I live in Massachusetts and I can't take it anymore. They need a true dose of humble pie. Generally, while I do not wish bodily harm on anyone, I want TFB (Tom Fahkin Brady) to break his throwing arm on the first play.

As my friend from Boston put it, "this is Sox/Yanks: February Edition", and I'm a Yankees fan. Moral of the story, they have a chance, and I hope they pull it off.

Check out previous incantations of our Q&A here.