Share All sharing options for: Orange::44 Is An Absolute Magician 4.0

The latest discussion in my ongoing tête-à-tête with Brian Harrison of Orange 44.

TNIAAM: The Syracuse Orange finished their non-conference schedule at 10-3. Better than expected, worse than expected or right on target?

BRIAN: It is most definitely worse than expected. Most people I think would have called the Ohio State game a tossup at that point in the year. I was not shocked that we lost that game. Even in the 2002-2003 we lost to a good team in Memphis early in the year. It has been the trademark of Syracuse to lose to a good team early, and then build upon that loss with good basketball. This year Ohio State was that game.

However, then the team allowed UMass to light it up in the Dome. This was a huge loss, especially allowing Massachusetts to get 107 points. This was the game, if Ohio State was not, to show the lack of development in the defense. I think the sad reality these days in college, and even high school basketball, is that when you have talented, high scoring players, they simply do not take the time to teach or learn defense before they get to college.

Similarly, after the OSU and UMass games, one would think that these served as wake up calls for the team. Maybe, just maybe defense would have been stressed in their own game, and personally they would have treated it as a priority. Alas, URI got the best of them again in the Carrier Dome.

Although the team has had some setbacks I think they are in a good place heading into the Big East Conference. Since the URI loss the team has put in four very solid games. Northeastern was one of the more solid games of the season, having committed only ten turnovers. While the team still could vastly improve in some areas, I think they have enough experience, and realize what their strengths and weaknesses are to start off well in conference play.

Overall, it is true that we were worse than expected, but that is not to say that all is lost in the Big East. Far from it. I truly believe that Syracuse will surprise some people down the stretch in the season. For now, we will wait and see.

TNIAAM: Depending on who you ask, the Orange have one of the top ten toughest schedules in the country so far. Aside from the Virginia game and the pre-season NIT match-ups, most of the quality teams on the schedule were already there to begin with. Was this the work of a tactical genius or just luck of the draw?

BRIAN: Jim Boeheim is a scheduling genius. I have grown up thinking this, and will continue to think this until proven otherwise. The man has continually scheduled decent mid-majors over the past several seasons. These include Drexel, Bucknell, UMass, Manhattan, UTEP, and other quality teams. They have also played many other quality major opponents in Missouri, Oklahoma State, Michigan State, and Memphis.

The way he schedules, he gives his team time to grow and then peak during the Big East stretch, the BET, or even the NCAA. However, with Boeheim we get the opposite of the Greg Robinson speak. He continually says that these teams we play are very good, pays them lip service, and frankly he is usually right. Not about Colgate, but about the rest. These days the extreme parity between the BCS Conferences and the others is not as it once was. The mid-major teams Boeheim schedules could easily win two or three games in the NCAA Tournament.

At this point, I can't see how anyone could say it was not tactical genius.

TNIAAM: First half of the season MVP? LVP?

BRIAN: This question is pretty hard. At certain points throughout the season everyone has been the MVP or LVP pretty much. Therefore, this choice will be purely on gut instinct and my impressions thus far. 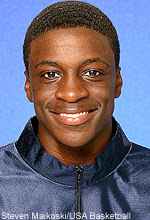 MVP for the first half has got to be Jonny Flynn. He is averaging 14.7 points and 5.8 assists per game. On top of that, his three pointer single handedly won the St. Joseph's game, he debuted with 28 points versus Siena, and he has a field goal percentage of 55%. He is also shooting about 80% from the free throw line and 42% for three point shots. When he is not scoring he is dazzling people with spin moves, ankle breaking jukes, and throwing around no look passes. He is a game changer, and generally one of the most entertaining players in the Big East so far this season. He gets my MVP nod. Honorable mention to Paul Harris. If he is not the Big East most improved player this season it will be a travesty.

LVP is a tough call. I would have easily said Josh Wright. Granted, I have always thought Josh Wright was a terrible ball player. Despite some made free throws during the Pittsburgh game to win the Big East Tournament in 2006, his career was easily underwhelming and forgettable. I named him the ATM (automatic turnover machine) after the departure of Louis McCroskey. For being the senior leader of the team he showed no leadership and no senior play. Just a few minutes of garbage time and a blown possession at the end of the URI game.

But, I feel like he was not a player enough to really be called LVP. Therefore, with a reluctant choice, I pick Arinze Onuaku. It is definitely not due to his scoring. His offense is solid and you have to be pleased with a low post man that is not afraid to take it to the basket hard. But sadly it is because he is not grabbing the amount of rebounds he used to. He is only averaging 7.5 rebounds per game so far this season. While this is good, for him not as good as he was doing before. He was pulling down about 20% of the rebounds while in the game his previous season. Now, not as much. However, this could be due to the fact that Harris and Greene are rebounding so well this season, when in the past he did not have such help. Therefore, although not a true LVP, for his own standards, he is a touch underproducing.

TNIAAM: Which are the three teams Syracuse most has to fear in the Big East this season?

BRIAN: Without question, before Saturday I would have said Pittsburgh is number one. However, after losing to Dayton 80-55, you have to wonder. They are still a solid physical team, and one of the toughest teams in the Big East in the last five years. Syracuse needs to be wary of this squad and play them very tight.

Next is clearly Georgetown. They are currently ranked #7, have only one loss to #2 Memphis, and is generally playing solid ball. While they should be fearful, Syracuse has bested Georgetown many times the last several seasons. I hope that we can play them tough down in DC on January 21 st.

Finally, I think you have to say Marquette is the third team Syracuse has to fear. They are ranked 11th , only lost to #10 Duke at Duke. I hate Duke. Anyway, Marquette has been the interesting conundrum of the Big East the last two seasons to me. Before they joined the Big East, the only thing I knew about Marquette was what I learned when they made the Final Four in 2003 with Syracuse. Now they have established themselves as a non-patsy in the league. This team generally has one or two fantastic shooters, and they are playing some great basketball right now. It will be interesting to see how Syracuse plays this team.

TNIAAM: Shockingly, Syracuse football is drawing in some top-level recruits. How does a 2-10 team not coached by Ron Zook do this? More importantly, how is Greg Robinson doing this? 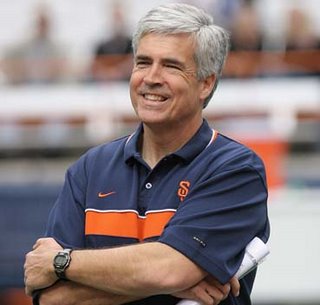 BRIAN: If you have a clue, call the Post Standard and tip them off. Just maybe Greg has just had some down luck the last couple of seasons and he always was a good recruiter. A few injuries and bad breaks have really just hampered the win column. It could be that that all is crap though. He could have just got lucky.

I really have no clue. I cannot explain it. I am dumbfounded. I find it hard to believe that Greg is just that good. I find it hard to believe that he could not land recruits this good previously. I do know that Syracuse is still a Big East school, in New York State, and the Syracuse name still means something in general. Syracuse is still relevant. Syracuse has up to date facilities, and I would rather play in the Carrier Dome on regional television, then play at some Big Ten school on only the Big Ten Network or some crap.

That, or the allure of unfettered Supercard money at Kimmel was just too much for any man to resist.

TNIAAM: SU Women's basketball is for real, but they haven't started Big East play yet and that means playing UConn, Rutgers et al. Can this team keep it up and make the tournament?

BRIAN: I think it is possible. They already have 12 wins, which is an extremely rare feat for the ladies this point in the year, at least since I started there in 2001. Save a couple rare exceptions like the 2002 NCAA Tournament they have not done much of anything. They are averaging about 75 points a game, which, if you have been to any women's game the past few years you know they have not been doing.

At this rate, they could win to the lesser foes in the Big East, get maybe twenty wins, and a win or two in the Big East Tournament, and that could earn them a seed in the tournament. At this point it is very plausible. Sadly I am unconfident at this juncture that they can handle UConn, Rutgers, or Pittsburgh. I am hoping to be pleasantly surprised.

Of course, this is all pending a pregnancy test of the entire team. Just to be on the safe side.

BRIAN: To win more games. Plain and simple, to win more games. Winning breeds success, success breeds revenue, revenue builds facilities, facilities attract more talent. Rinse and repeat. This is especially true for football. When Syracuse, a private institution, is competing with state schools such as UConn, Rutgers, and West Virginia, it is hard to keep up with state money being given for facilities. In the case of UConn, $90 Million to be exact.

If I had to pick a resolution, it would be to stop all these stupid slogans that the good DOCTOR keeps peddling in the faces of good Syracuse fans. People are not stupid, yet Gross continues to treat paying customers as idiots. "Together We Stand"? Last I checked this was not the Civil War. People know if there is an inferior product in the marketplace, and some slogan will not change that. Similarly along those lines, can we stop retiring numbers left and right? Even one a year is too much. A retired number is to be reserved for the pinnacle of players at Syracuse. It should also not be something we do just to get bodies in seats. Frankly, that does not even work anyway. That is why this would be my New Year's Resolution for Syracuse.

As for my site, I'm hoping, much like State of the Orange, to not put so many crying faces up. That, of course, is not really on me though. It is a touch out of my control.