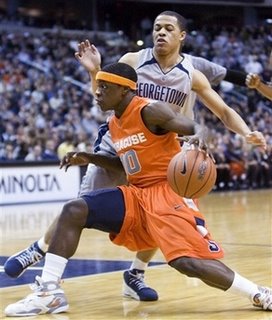 At Jim Boeheim's Big Orange Basketball Camp for boys ages 8-18, you can imagine that fundamentals are a driving force behind the lessons learned. Hitting your foul shots and limiting turnovers are probably at the core of what Jim teaches. As far as I can tell, there's still room at the camp, and if they're willing to be flexible on the age thing I think we can get Arinze, Donte and Scoop in there no problem.

Jokes aside, that was a heartbreaker. Defying the odds and possibly logic, the Orange went on the road and took the #9 team in the country to the brink before finally succumbing 64-62 in overtime when Jonny Flynn's buzzer-beater rattled in and out (and I mean IN and out). Big picture wise, the Orange are now 13-7 overall, 3-4 in the Big East and winless in the conference on the road. Hardly the stuff of NCAA bids.

Looking short-term, it was a good game for this young Orange team to play. Now they know they can hang with one of the best teams in the country when they want to. They also learned some of their physical limits with many of the players clearly fatigued by the end of the game, including game hero Jonny Flynn who scored 24 points but none in the last 9 minutes of regulation. Once again refs factored into the game although instead of doing too much as in the Villanova game they seemed to do too little, which is rarely a complaint you get to have these days. Axeman breaks its down:

They only called 30 fouls in last night's game with the Hoyas and swallowed the whistle in some critical areas of the game, namely when Jonny Flynn got murdered driving to the basket in overtime. I understand that people see things differently, that no two games are the same, and that Big East games are rough. But are you going to seriously tell me that the rules can be interpreted so loosely from one crew to the next that there is a difference of 17 fouls called?

Some other good things to take away from the game...Syracuse out-rebounded Georgetown (WTF?) 43-33. The Orange kept turnovers to 13, which is good for them, but the less we talk about Scoop Jardine, the better.

The good news for the Orange is that the pressure is officially off. This team is not expected to make the NCAA tournament anymore (yeah, I said it). But maybe that's a blessing in disguise. Clearly the pieces are starting to come together but there's still a lot to be learned and lot of getting used to. I fully expect the Orange to remain competitive and win quite a few more ball games this season but it's about learning from here on out. Jim Boeheim the NCAA Tournament Credential Huckster gets a year off and Jim Boeheim the Motivator and Teacher will be putting in some overtime.

Be sure to check out CuseAdelphia and Three Idiots for their game recaps and get all your stats right over here.. The Orange get a six day reprieve before Providence (12-5, 3-2) comes to town on Sunday.