I Hate Myself For Loving WVU

Share All sharing options for: I Hate Myself For Loving WVU 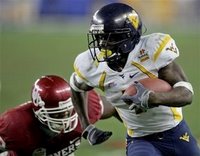 If Joan Jett were a Syracuse fan in 2008 watching the Fiesta Bowl last night when she wrote her classic tune, perhaps it would have turned out a little differently.

(To be honest, I don't see Joan as a Cuse fan anyway. She seems like more of a UNLV fan to me for some reason. Maybe it's all the smoking. Plus, I think she might have been a cutter, and we've got enough problems as it is)

It's a phenomena that seems strictly related to college sports. No self-respecting Mets fan roots for the Braves in the playoffs simply because their in the same division. Same goes for Jets fans and the Patriots, Yankee fans and the Red Sox, etc. Yet for some reason in college sports, we spend the entire season hating the guts out of certain teams and we then spend the post-season living and dying by their success, as long as its not at the expense of our own team's.

There are exceptions to the rule (UConn basketball comes to mind) but for the most part you root for your conference foes whenever they're playing someone from another conference. Maybe it's this "we're the best conference" rhetoric always floating around. Maybe it's territoriality. Maybe it's familiarity. Maybe it's a little of all three and more.

Regardless of how you feel about the 'Neers, you probably should have been pulling for them as well. With UConn's loss and USF's disappearance in earlier bowls, WVU needed to maintain the Big East's presence in the big picture as a legitimate conference. With Rutgers' win (I assume) in the International Bowl, the conference will have gone 3-2 in bowls, which doesn't match last year's 5-0 run but certainly sounds better than 2-3. Not to mention the fact that the Big East has now won it's last three BCS bowls, over a team from the SEC, ACC and Big 12.

So while I was pleased to see West Virginia win the game, once it was over my pleasure turned to abject horror. I remembered that we have to play these guys next year. And Noel Devine will be prominently involved.

Interesting sidenote...the Fiesta Bowl, one of the five biggest games of the year and prominent jewel in the Bowl Championship Series...wasn't mentioned in the LA Times until page 9 this morning. If you still need any proof that the BCS stinks, I don't know what to tell you.