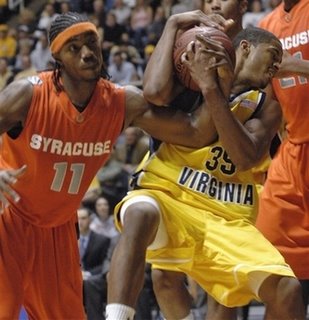 Context is so important sometimes. If Terrell Owens said the above statements he would be grilled mercilessly on talk radio for a week. If Brett Favre said them, he'd be hailed as a true warrior, unashamed to admit his own faults. For Paul Harris, you have to realize the context of why he said what he said. It's probably best to look at the full body of his discussion with reporters after the Villanova loss.

"I didn't play half as good as I can play," he said. "Not at all. I didn't even really try to get rebounds. Some of them just kind of fell into my hands. And I didn't score as much. If I'd have made some game-changing plays - like, get offensive rebounds or anything - we could have won. I take the blame.

The easy option here is to fault the kid for not giving 100%. Shame on him for not giving it his all at all times in a situation that millions would kill to be in. But then you have to remember that, yes, he is still a kid. He's a kid that came to Syracuse under the weight of tremendous expectations, expectations that were not full met last season. He then saw how quickly the spotlight can fade as the new class arrived. Perhaps it would have been a blessing in disguise if SU wasn't so injury-riddled.

It's been well-documented this season that Boeheim is riding Harris unlike anyone else on the team. We don't know the specifics and there's probably plenty more to it than what we see on the court and hear in the press conferences. But from what we could gather even before Saturday, it hasn't been a dream season for Paul Harris despite his solid statistics (13.2 ppg, 9.1 rpg).

Everybody needs to decompress every once in a while when it just gets to be too much and Saturday was Harris' chance. Should he have stayed silent and waited until there weren't microphones in his face? Probably. But that's easy to say when you're not in his position, dealing with things in such a public way.

And keeping with the context of the situation, Paul Harris wasn't handing over his resignation letter. Not at all. If anything, this was Harris' way of bringing the issue out, uncorking it and letting it all out in hopes that maybe this will help him deal with it a little better. A tipping point, if you will.

"Georgetown is a very good team...This is going to be another tough one, and what makes it so bad, we're not even going to be home. It's going to be away. But we just gotta be prepared. You gotta love college basketball. You know, the games come so fast. I like playing, you know what I mean? So I'll be ready to play."

Paul Harris cracked...but he hasn't broken. Now it's time to build him back up. And if we trust Jim Boeheim as not just a coach but a molder and motivator of young men, this is exactly what he's trying to do.