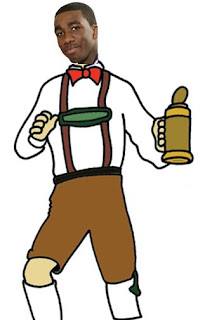 Yesterday I received an email from astute reader Ryan who discovered that ESPN was listing Donte Greene's hometown as Munich, Germany. The Hitler references starting dancing in my head but I thought to myself, better double-check this one first. Sure enough, there were other sources that mentioned the Germany thing as well.

Strange, Donte doesn't strike me as German. And his accent is so, well, as un-German as you could possibly get. And most places list his hometown as Baltimore which is slightly west of Berlin, per my understanding.

Without access to Greene (and it is Greene with an "e." Next person who calls him Donte Green gets a 2007 Sudden Impact Syracuse football prospectus in the face), I alerted Axeman to this strange quirk. Once the generic questions were out of the way, Axe got down to the business of asking the hard-hitting questions.

So, you play the drums, eh?

I have been playing the drums since I was in elementary school. I played for my church.


What other musical talents do you have?

And finally...so you born in Germany???

"Yep. I was born in Munich, Germany. I lived there 'till I was three or four and moved back when I was twelve. Stayed there for awhile, loved it. That's my home country. My mom worked for the NSA so that is why we lived there."

First off, how do Donte and Kristof! get along on and off the court? The sting of Germany's 1914 invasion of Belgium must still be fresh on their minds. Second, the NSA? Jesus, have we been underestimating young Donte all along?

He goes out of his way to say she "worked" as in past tense. Hiding something? Perhaps. I mean, now that I think about it, how did we get such a good player to come all the way from Baltimore with so many good basketball schools closer to him? It's all too convenient. If I were a high-ranking official at SU I'd watch my back. Some have called Donte an assassin on the court but if I'm right, and I'm 97% sure I am, his sharp-shooting skills reach far beyond the hardwood.

Fortunately for said high-rankers but unfortunately for us, it's looking more and more like Donte is a one-year wonder for the Orange. According to Axe...

The NBA scout I sat next to openly questioned if Donte Greene was really 6-11, as he is listed, but gushed about him otherwise. He said he hasn't seen alot of players his size who have a shooting stroke as good as Donte's...The more scouts that I talk to, the more they love this guy.

In other words, by the end of this season his "mission" will have been completed and it will be time for him to move on, change identities and disappear Jason Bourne-style. One day you'll be traveling in Rome and you'll see a pick-up basketball game taking place. A familiar face will line up a three-pointer and swish it with ease. You'll ask the local next to you, "Is that...Donte Greene?" He'll reply "No...it eez Frederico Vespucci...he's-a Sicilian." You'll think to yourself "Well that explains the tan" and then you'll go about your business none the wiser.

Then you'll hear about the suspicious death of Cardinal Putzio...and you'll know...