Cut Them Some Slack...It Was A Really Big Win

Share All sharing options for: Cut Them Some Slack...It Was A Really Big Win 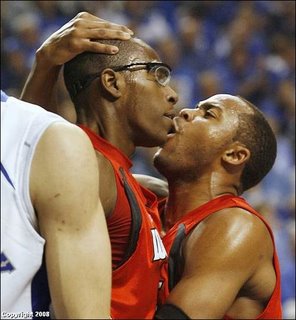 They're getting all kinds of fired up in Louisville these days. Not so much over the basketball's team defeat of Kentucky. But much more so on all the man-on-man action going on during the games.

That photo to the right was the lead photo in the Louisville Courier-Journal's game story. I don't want to jump to conclusions here but I'm going to guess your first thought was "Whoa, looks like those two dudes are kissing...but I'm sure they weren't actually...not that there's anything wrong with it if they were...I'm progressive...I know a gay at work."

Apparently, a lot of readers thought the same thing when they opened up their paper in the morning before spitting their coffee all over the photo in horror. They then flooded the paper with complaints peppered with words and phrases such as "Awful," "an embarrassment," "horrible decision," "poor judgment," "distasteful," "a mystery" and "shame on you."

NOW, clearly this is an issue based on context. If you're offended because it looks like the players are gay and you hate gay people, well then you're an asshole. But if you're bothered because it cites a serious lack of judgement on the paper's part considering hos obvious it is the photo looks "salacious," well, perhaps you have a point.

Not so, says Pam Platt, public editor of the C-J:

I have to admit I was a little baffled by the response. Aren't sports the province of the ubiquitous fanny pat? Aren't players in each other's faces all the time during athletic matches? Yes and yes. So what's a little game-time hug in that universe?

As for the theory floated by some readers, that this was a purposeful attempt to rile or humiliate Cards fans, it doesn't really deserve a response but [Sports editor Harry] Bryan has one: We're not in the business of offending or agitating readers.

Which would make sense...but Card Chronicle isn't so sure that's the truth:

"Not in the business of offending or agitating readers?" Please. The C-J has utilized the Gregg Doyell and Bill O'Reilly (this isn't political) school of "you don't necessarily have to believe it as long as it sparks conversation" journalism for multiple years now, and that's OK, I've accepted it. I understand that print is dying and that money has to be made, so I don't care if you print absurdly outrageous or offensive stories and columns as long as you give me some quality professional pieces in between. This is the way things are now, I don't like it, you probably don't like it, but don't try and tell me that it isn't so.

ManloveGate continues in Kentucky and I'll keep a close eye on things, but not in that way. It's tough to believe that multiple, high-ranking people at the paper didn't see what 99.999% of people would probably see in that photo but regardless, it got more eyeballs focused on their paper so, "congrats."

All I do know is, thank God Eric Devendorf didn't go to Louisivlle.