Share All sharing options for: Orange::44 Is An Absolute Magician 3.0

The ongoing melding of the minds between myself and Brian Harrison of Orange44 continues...

TNIAAM: The SU basketball team's fortunes seem to change with every game. How are you feeling about them right now?

Brian: Well, I'm currently penning my URI Postgame Reactions (yeah it is a little late, but I'm in the middle of finals), and there are an awful lot of storylines playing out right now. Overall, I still feel pretty good about this team. More accurately, I think I see the potential of this team in the future. However, the big question is whether or not the future is here or the future is next year, DOCTOR Gross marketing slogans aside. 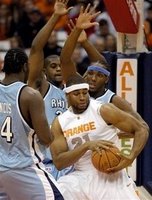 Ideally, should never lose a non-conference game. If they do, it should be someone ranked higher so it is not a bad loss. This is not the case this year, nor has it been the last couple. This team has every offensive weapon at its disposal though. You know, minus a terrible shot selection, that there is a good chance of scoring on each possession. The same cannot be said for defensive stops. That being said, it was not the defense that lost the URI game. Clearly, lack of rebounding was the nail in the coffin for on Saturday. So if it is not one thing, it is another. That is the scariest part.

Besides all of that, this team is damn fun to watch, which is something we all agree upon. I think if we can remain undefeated through the remainder of the non-conference schedule, and notch some big wins and some upsets in the Big East, we should be dancing at least a bit. But really, I just want to see win some big games, preferably not just in in a certain awesome tournament.

TNIAAM: Gun to your head, is this team going to make the NCAA Tournament?

Brian: Well the good news is that we play twice. The bad news is we play twice. Looking at the Big East schedule, there is a chance that we can attain ten conference wins, but is that even enough anymore? Last year proved that it is possibly not enough.

I think that the team will grow however. In the Big East, I think we will surprise some people and win some games that we probably have no business being in. With your Glock 9 to my head, I will say we are in.

TNIAAM: SU has famously been lambasted for its scheduling practices the last few years. With multiple losses at home to A-10 teams and a loss to a shaky Ohio State, were we better off just playing cupcakes like we used to?

Brian: I have always believed, as the selection committee before the last couple years, that you get your work done in your conference slate. I was always fine with Boeheim playing less that amazing non-conference foes, with an occasional or mixed in, maybe an NC State. But apparently everyone is on notice that this is unacceptable to the selection committee.

This year, frankly, our non-conference schedule is not that hard. The problem is we have a young team still learning how to be a college player. I think the only thought anyone that is a fan should really have is "In Boeheim We Trust". He has been doing it for over 30 years, and with the success he has had, you have to believe he knows what he is doing. I will not call him out on this issue and whatever he feels is probably the best. I do not think that anyone, except maybe a few selection committee members, thought that did not deserve to go to the tournament last year. Therefore, when Jim sets his team up for success, I have no complaints. It is not his fault if his team underachieves, most of the time.

Also, The Atlantic 10 is playing out of its mind this year. Ridiculous.

TNIAAM: The football team recently hired Mitch Browning as the new offensive coordinator, a guy with a good reputation but not exactly one based in the West Coast offense. Good hire?

Brian: Hell yes it is a good hire! ANYTHING is a good hire at this point. Will it be a good hire come October of 2008? I am not so sure. Just looking at this guy's resume though, I am pretty impressed. I was always a fan of the option attack that Coach P implemented. That being said, I hated running up the gut on third and long, which they always used to do. Regardless, it has been clear that the West Coast Offense has not been a beacon of success. Changing the philosophy is not a bad thing really. This guy had a nice career at , so you have to believe he knows what he is doing.

It also begs the question as to what the philosophical difference was between Greg Robinson and Brian White. From what it sounds like, based on the fact that Browning is not a huge West Coast guy, that Robinson wanted to get away from the West Coast a bit, and White would not. We shall see next season if any of this matters at all.

TNIAAM: Men's athletics at seem to be taking a step backwards but women's athletics is currently flourishing. Any reason specifically you can think of or are the stars just aligning that way?

Brian: Success breeds success. Coach Q has had a top 25 recruiting class for the past couple of seasons. Logic would dictate that would pay off at some point. is the defending Big East Conference Women's Lacrosse Champions. The team only lost to #1 Northwestern. Now they have that aforementioned legend at the helm. I think it is simply the stars aligning for one magical season for the ladies. Sadly the ladies do not make the cash or the splash.

As a somewhat related thought, I do miss going to women's basketball games at Manley Field House though. When the crowds are not that loud you can hear heckling amazingly there. I once heckled Dianna Taurasi from UConn so bad, she flicked me off as she left the court. Ah good times.

TNIAAM: Random segue...the blogging community has ballooned in recent months. Your thoughts on the SU information highway online and what influence, if any, bloggers have on the programs or the fans. 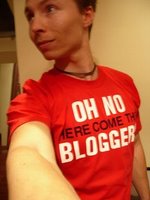 Brian: I am under no illusion that I am changing the world via Orange::44. I do not blog to be rich and famous, or even to gain a little notoriety. I do it because it is a release, a way to vent my frustrations, and to relay an informed and educated opinion to people who want to read it. I hope I make enough sense, and my flowery prose is entertaining enough, to have created a loyal readership, and not just because Orange::44 has links next to a lot of sights.

I love the fact that blogging has blown up, despite the desires of "reputable journalists". I merely have a degree in Political Science and am halfway through a legal education, but I feel good writing is good writing. I think most people would agree as well. That is not dissing the formally trained journalists out there. I am sure I would be terrible on television. I'm more of a radio guy anyway.

The more sources people can get information, and the more opinions there are, the better it is for everyone. You can read your news how you like, you can give instant feedback to the author, vent your frustration, or drop some kudos. What did we even do before the internet? What a boring world.

I think bloggers have a slight effect on the average fans of the program. I mean, if you read an opinion like a certain coach is terrible, outlined with several facts, and you had never thought about it before, chances are you would also then agree that that coach is not good. Really, that is what the internet is best used for, a free exchange of ideas. Plus, a little cross promotion like this fine collaboration is never a bad thing.

Also, if Axe is reading, I'll be at the Cornell game on December 22nd so if you have an extra press pass for the game I'll be glad to live blog with you. Nothing like a little press row love to legitimize any outfit, especially when my partner in crime leaves to start yet another awesome blog.