One Thing At A Time

Share All sharing options for: One Thing At A Time 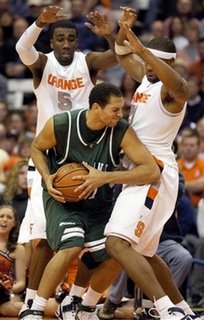 As exciting as SU basketball has been this season, we already know there are quite a few issues that need fixin'. In contrast to their offensive tempo, the Orange seem to be of the mind that slow and steady is the way to fix them.

Take our 70-63 win over Tulane on Saturday for example. One area the Orange have been in dire need of improvement (not just this season but for many seasons) is rebounding. Against UMass and Washington we grabbed a mere 10 offensive boards in both. Against Tulane, we grabbed 20. More importantly, we turned those rebounds into into 24 second-chance points. Overall, Syracuse out-rebounded Tulane 47 to 33.

Naturally, player of the game honors would have to go to Arinze Onuaku, whose effort tipified the evening. 14 points, 16 boards, 3 blocks and 4 steals. But don't count out Paul Harris and Donte Greene, who both grabbed double-digit rebounds as well. In fact, it was the first time Syracuse had three players in double-figures for rebounds since 1997-98. Say what you will about this team but when they do something, they really go all out.

Nice to see the Orange can win a "low-scoring" affair such as this one. And you can even say that they played some solid defense for perhaps the first time this season. Jim Boeheim certainly thinks so:

I didn't get to watch the game so I don't have much to say about the technical fouls. I leave it to Axe to fill us in on what happened.

As Boeheim explained, he was trying to point out to Burr that what the Tulane player was doing at the free throw line was illegal and Burr makes a wise crack about a video Boeheim made before the season about coach's conduct with referees. I cringed when I heard before the season that the NCAA was cracking down on coach's conduct and that call is a prime reason why...And the call on Jonny Flynn? Not even close to being anywhere near worthy of a technical. Burr is just terrible and he is a hot head to boot. I always sigh heavily when I look at the score sheet and see his name lined up as a referee.

So, Syracuse fans, add referee Jim Burr to your voodoo list along with Doug Gottlieb and Gary Walters.

So it was a nice win to get Syracuse back on track. Of course, Tulane isn't all that good so I don't know what it says beyond the fact that, when they put their minds to it, this Orange team can perform fundamentals. The sky falls and Satan comes to devour us whole on Wednesday when the Orange (gasp!) leave the state of New York in December to take on the 6-1 Virginia in the "Fuck You Very Much, Gary Walter Classic" (FUVMGWC for short). For the Orange, its a great test of how they play on the road with a hostile crowd. Let's hope some of these fundamentals carry over.