Next Stop: Outta The Big East

Share All sharing options for: Next Stop: Outta The Big East

Rich Rodriguez’ departure from shouldn’t come as a huge surprise. The guy almost bolted for last year before rescinding their overtures. Speaking of, here’s a great snippet from the USA Today’s article about said decision last year: 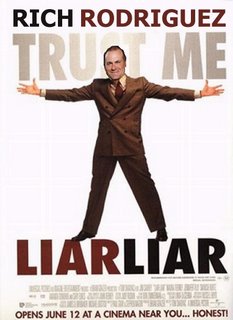 Rodriguez said he plans "on being here a long time…There weren't many reasons not to go. It's all about the reasons for staying," Rodriguez said. "I'm biased, this is my school. I think it's a great place to raise a family. We've always had a great athletic tradition."

Anyway, that was before Rodriguez led the Mountaineers to another Big East title and came within a Wannstache of playing for the national title. In retrospect, how did people NOT think he would take one of the high-profile jobs out of town? However, while Big East schools may rejoice because one of their rivals has been weakened, Rodriguez’s decision to bolt confirms that despite all the bowl wins and despite all the national exposure, the Big East still has a long way to go.

Look around at all the BCS conferences. Each of them has at least one or two "last stop" institutions for head coaches, meaning that they have traded up as far as they can and any move to another school would be a step back. The Pac-10 has USC, the Big 12 has Oklahoma and Texas, the Big Ten has Michigan and Ohio State, the ACC has Florida State and Miami and the SEC has, well, quite a few. Only the Big East doesn’t have a football program that would make a head coach feel like they have reached the pinnacle of their profession by winning there. If that were the case, Rodriguez would be preparing for the Fiesta Bowl instead of wooing recruits to .

Look around and you’ll see its not just Richy Rich. Petrino bolted after one season on top (granted, Petrino would bolt his own kid’s birthday party if they thought the one going on down at the Chuck E. Cheese had better pizza). Mike Dantonio parlayed success at Cincy into a gig at and current coach Brian Kelly was heavily rumored for other jobs after just one season there. Randy Edsall put his name in the hat for a few jobs, including Georgia Tech. Greg Schiano even toyed with the idea of going to before deciding he’d like to continue trying to turn into a "last stop."

This isn’t to say we can’t become a conference with those kinds of teams. We just have to face facts that we’re not there yet. Like I said, Schiano has spurned two "last stops" in as many years to stay at , a thought that would have signaled severe brain damage only two years ago. Jim Leavitt has built the South Florida program from scratch so he may feel a sense that his work isn’t done until the Bulls are winning conference championships and ruling the recruiting wars. And depending on who gets, they still are the program best suited for this kind of re-positioning (if you believe the rumors, Nick Saban???)

Assuming they repeat their success next year, Kelly is probably gone from Cincy and Edsall will probably trade up from UConn (which is understandable). It’s a frustrating process to watch for sure but it is somewhat inevitable. If this season was more trend than fluke, we can expect the shake-up in the old guard of college football to continue. If so, it’s a perfect time for Big East teams to make the leap. The question is who will do it and furthermore, will the head coach responsible stick around to see it through?