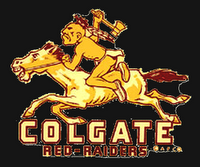 It's Colgate time, Syracuse fans! Normally, not a big deal. Syracuse has beaten the Red Raiders 41 straight times and leads the overall series 114-45. But in a year when Navy can snap a 43-game skid against Notre Dame in football, you remember that anything is possible.

Besides, we are talking about the 2007-2008 Orange here, aren't we? Already volatile and unstable from game to game, we'll see what happens when you remove the most experienced player and 2nd-leading scorer from the equation as they play their first game without Eric Devendorf.

First question...who starts in his place? Apparently, it's Scoop Jardine.

Scoop Jardine practiced with the first team Monday when the Orange prepared for today's game with Colgate...Starting Jardine at shooting guard would allow for the least amount of disruption to a young lineup with just two days to prepare for its next opponent. At any rate, Jardine, Rick Jackson and Kristof Ongenaet will get plenty of minutes.

Also expect to see walk-on Justin Thomas get some PT off the bench and just-in-time arrival Mike Williams should get a look or two as well. It seems like Boeheim is learning how things will gel just as much as we are.

Colgate (6-3), is off to its best start since 2001-02. Junior Kyle Roemer is averaging 19.2 points, the most on the team. He also leads the Patriot League in field goal percentage and three-point field goal percentage. The Raiders are currently 4th in the nation behind the arc, so expect that to be the focus of their attack against the zone. What else is new?

Prediction: Syracuse 91, Colgate 81, Donte Greene erupts for 30 to prove he's up to shouldering the load.