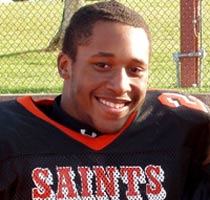 I'm not one for getting too wrapped up in the world of college recruiting. Maybe it's the constant use of the word "stud" by grown men when describing seventeen-year-old boys. Plus, when it comes to Syracuse football, there really hasn't been much to talk about the last years anyway.

But apparently, Greg Robinson and his crew decided it might be time to attract some blue chippers (much better than stud), and it seems to be working.

Four-star wide receiver Marcus Sales from Christian Brothers Academy made his verbal commitment to SU at a press conference at CBA, while four-star running back Averin Collier (photo) from Churchville-Chili told The Rochester Democrat & Chronicle that he, too, would accept SU's scholarship offer.

Recruiting Web site Scout.com ranks Collier the 10th-best running back in the country and Sales, the 27th-best wide receiver. Collier and Sales are Orange head coach Greg Robinson's top two recruits so far and now give the program 19 recruits for the class of 2008, according to Scout.com.

Collier chose Syracuse over eighteen other schools including BC, Rutgers, Pittsburgh and Georgia Tech. Sales cited the camaraderie between he and his fellow SU recruits as a key reason for committing.

How big is this? Digest this quote from the D.O. Sports blog:

When asked, a Scout.com representative said Syracuse has not snagged the top recruit in New York since the inception of the Scout.com database in 1998. So we’re talking at least 10 years since Syracuse has accomplished a feat quite like this.