Big ups to reader Adam for catching what I was too busy skimming to see. In that interview with Katz in yesterday's links, Boeheim tells Andy that "he firmly believed Devendorf was going to declare for the NBA draft after this season, but now he'll have to stay to rehab his knee." 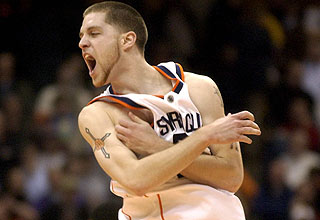 Wait…ERIC Devendorf? Considering early entry into the draft? The NBA draft? Not the army one, right?

Considering we are talking about the institution that didn’t feel Gerry McNamara was up to snuff and is currently having a hard time providing Darryl Watkins and Demetris Nichols with steady employment, is Devo for real?

As a sophomore, Devendorf averaged 14.8 points and 4.1 assists per game and earned All Big East team honorable mention. Not too shabby but nothing that would cause NBA scouts to fellate you. This year, he’s second on the team in scoring with 17.0 points, second in assists per game (3.9), second in 3-point pct (40%), and third in minutes played. While he has been the de facto team leader, it’s more a role thrust-upon him than a role he has taken upon himself.

This was never more evident than the UMass game when Devo let a heckling fan get to him. While the fan was indeed a jackass who deserved to get it back, a leader on the court just doesn’t let these things get to him and its little things like that that will affect the way he’s seen in a larger sense. If a random student can rattle his cage, imagine how bad a trash-talking NBA player could get under his skin.

Devo already has a "Hurley-esque" reputation around the country as being a cocky, little white boy who thinks he’s better than he really is. People like Doug Gottlieb constantly call out Devo for his on-the-court antics and "thuggery" and supporters can’t really point to too many instances to refute their claims or say why Devo is worth the trouble. Maybe some of that talk is true. Maybe most of it is just conjecture based on appearances.

Whereas Donte Greene is looking like a lottery pick at the moment if he (shudder) leaves early, Devo isn’t showing up on anyone’s draft radar. Apparently, it seems like the only person who has noted Eric Devendorf has the ability to be drafted next year is…Eric Devendorf.

Perhaps this injury is one of those blessings in disguise (inasmuch as painful, life-altering reconstructive surgery can be construed as a "blessing"). Devo gets a year to think about things. Watch the team develop and see how he fits in next year. He'll be a little older. A little wiser. And there will be hair in places there wasn’t hair before.

There’s two ways he could look at it. One side of the coin says "See, you got injured, there’s no time to mess around." He’ll leave early, not get drafted where he wanted, or at all, and begin his struggle to play basketball professionally around the globe.

Or perhaps this gives him some clarity. He looks at the struggles of G-Mac, Demetris, Damone, , Mookie and others and sees that a decent statistical college career does not NBA success make. He’ll make himself better. He’ll play smarter. He’ll return for his last year and be feted on campus. Enjoy the last time in his life when he’ll be deified. He’ll define himself and maybe, just maybe, become more attractive to NBA scouts.

The debate is currently raging on as to whether or not Eric Devendorf’s absence is such a bad thing. Hopefully, Eric will quell that debate when he returns next year instead of worrying about whether or not the Spurs will take him with the last pick in the 2nd round.