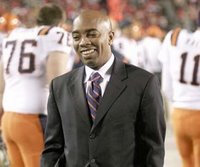 You knew there had to be a follow-up on the weekend's bombshell that Syracuse athletic director DOCTOR Daryl Gross is being wooed by the University of Miami for their vacant job. What's the craziest part about all of this? How bout the fact that...Miami isn't the only school inquiring about his services! Donnie Webb, shock and awe us...

I'd heard several weeks ago that Gross may have had talks with Oregon about the AD job there. I asked Daryl about the rumor. He told me he had not pursued any position, that Oregon had called him. He told them he wasn't interested.

Daryl Gross is batting job offers away like they're irritating flies. Think about that next time you see Syracuse's combined football record over the last three years.

What's even better though is that Gross has personally addressed the interest from Miami. Instead of just providing a lucid and to-the-point response that pledges his allegiance to SU and confirms his non-interest in another position, Gross uses the opportunity to give himself a public reach-around.

"I am flattered by Miami's interests. They obviously have terrific history. It's nice they recognize what I have been able to help accomplish and recognize that I work with vision and patience."

Let us know when you've wiped your mouth off...

"With that said, I have much to accomplish at Syracuse. We have good momentum in our Olympic sports (Ed note: with the exception of swimming and diving, natch), with the addition of some wonderful head coaches who I am very proud of. Football takes time, patience and sophistication but we will definately get there. We have some huge impact projects on the horizon and we are fund raising to build more facilities and fields. The goal is to make our program extraordinary across the board and I have not changed from that mission.

"I have had tremendous support from our chancellor and board members and my wife and I truly enjoy central NY.

Very nice sentiments but I really didn't get a 100% denial of interest there. I got more of a "I'm in it 'til the end...but then again I haven't seen your offer yet" feel from this. Considering that, somehow, this guy is the AD du jour, I don't think this one is over just yet. That is, not until we see the official statement on SUAthletics which will naturally be titled "Gross Convinces Gross To Stay, Says Gross."