Who Wants To Be Our Next Punching Bag, Part VII

Share All sharing options for: Who Wants To Be Our Next Punching Bag, Part VII

Today we take a look at Dan Mullen, the Florida OC and one of the leading candidates to make the leap to head coach at the end of this season.

Personal History Mullen was born April 27, 1972 and grew up in Manchester, N.H. He graduated in 1994 with a Bachelor's Degree in Exercise and Sport Science from Ursinus College (Pa.) and earned his Master's in Education in 1996 from Wagner College. He was a two-year starting tight end for Ursinus, named a first-team All-Centennial Conference

selection as a senior.

Coaching History
While at Wagner's earning his Masters, Mullen split time with the football team as their wide receivers coach. Upon graduation, he headed to Columbia where continued to coach WRs.

In 1998 he came to Syracuse as an offensive graduate assistant. Mullen worked with present offensive coordinator Kevin Rogers and followed him to Notre Dame the following year in the same capacity.

After spending two years with the Irish, Mullen left for Bowling Green where he was the quarterbacks coach for two seasons under Urban Meyer. He mentored Josh Harris, who went on to established school records in career rushing TDs, total TDs, points scored and TDs responsible for.

Mullen parlayed that job into a role as quarterbacks coach at Utah in 2003, following Meyer. While there he orchestrated Alex Smith's transition from a pure drop-back passer into a spread offense quarterback. It paid dividends in 2004 when Smith was Utah's first-ever Heisman Trophy finalist and Utah won the 2005 Fiesta Bowl. Mullen served as the interim offensive coordinator for that game. 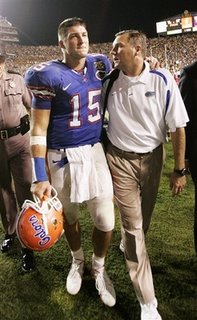 When Urban Meyer left Utah for Florida in 2005, Mullen went with him and became offensive coordinator for the Gators. Mullen played an integral role in Florida's second national championship, overseeing an offense that averaged 29.7 points and 396.1 yards per game. His offense produced 41 points in the National Championship Game.

Before the Florida-Auburn game this year, Mullen felt something wrong and his abdomen was searingly painful. Mullen went to the hospital and underwent an emergency appendectomy at 1 a.m. Saturday, less than 24 hours later, he called Florida's offensive plays in the Gators' 20-17 loss to Auburn. Let it be said the man is dedicated.

Snags
No head coaching experience, which is not an attractive thing to Syracuse fans at the moment. And although he's been hugely successful, he's only been offensive coordinator for three years and even then, how much of it is him and how much is Meyer? Tough to say just how much impact the guy has at the moment.

What's It Gonna Cost?
Couldn't dig up any salary info but based on his credentials (national title, Florida's offense, Utah's offense), he's probably looking at a decent salary out of the gate, something akin to what Robinson is making now.

Would He Take It?
Only if better offers didn't come pouring in. He spent a season here but I don't know how much loyalty that breeds. It's expected that many schools are going to vie for Mullen's services, if we're up against a Texas A&M or a UCLA, can we match that?

Would Fans Want Him?
He brings with him a fantastic offensive scheme, but I'm not entirely sure it fits here. At least not yet. Lots of question marks in my mind about his ability to be the head honcho as well as his recruiting ability and defensive game-planning.

Plus, he's been groomed by Urban Meyer who has built his career on quick rebuilding efforts parlayed into better opportunities. Is Syracuse a home for Mullen or the stepping stone to something "better?"

I think he'd be an interesting option but not the safest pick in the bunch.